The spring is finally back! Great time to enjoy outdoors and to do some final exploring before we get too busy. Focus is crucial in our line of business so there will not be so many trips purely for pleasure this summer…
First Sunday of April brought beautiful, sunny weather and we decided to head in to the hills. This time following ancient Roman road leading from the coast all the way to the interior.

The basic route was to follow the modern road (that closely follows the Roman and pre-Roman communications) from Pakostane on the coast via ruins of Asseria  to modern day Medviđa (Liburnian/RomanSidrona?) and Krupa river spring into the heart of southern part of Velebit massif.
Tourist board of Benkovac did a great job putting the milestones by the road!!!

Our first stop was Kaštel Žegarski. Ancient tower guarding a fertile valley of Žegar. I have never visited although must have passed it several dozen times.

It is a typical tower from the 1500s like numerous other in the region. It is quite well preserved with even some wooden elements still supporting the former windows. Hidden in the woods, one has to look closely when entering the village to spot it between the houses on the right.

We continued over the hill to Krupa river spring. It is quite lively by the river these days with people picking wild asparagus, shepherds with goats and sheep…

We did not spend too much time there as we are familiar with the place. Krupa is probably Croatia’s most beautiful river but the spring is hardly impressive.

Soon after the spring, the magic starts and few kilometers later, it enters the most beautiful canyon. 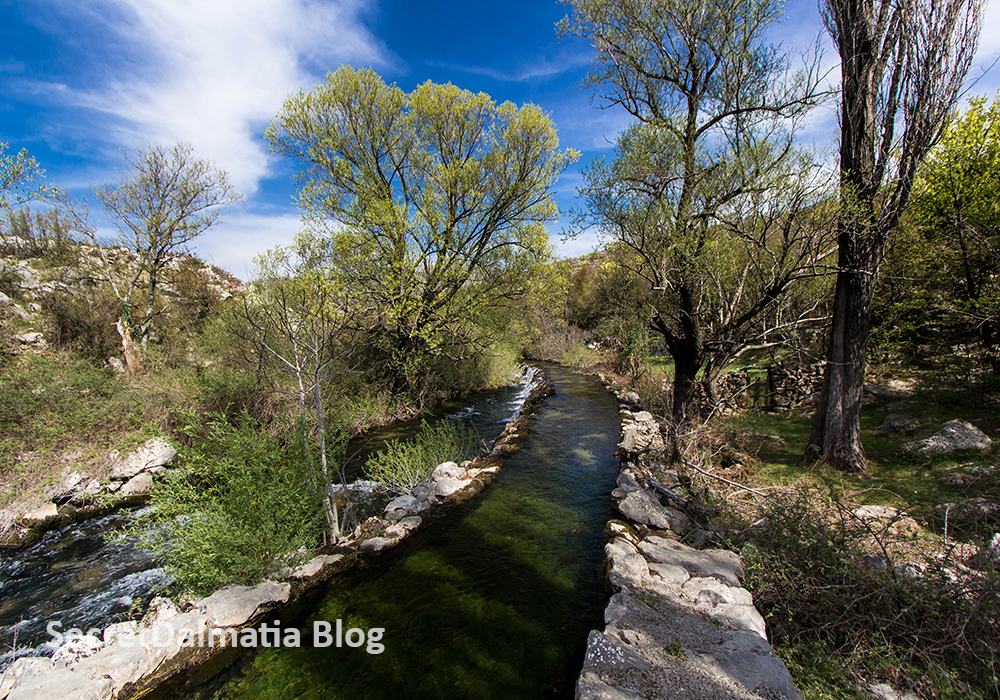 But, our goal was Lika. Following the ancient road that most certainly passed through this region. It followed the ancient communications and gradina hilltop fortresses lined along the route. The last one is Smokovac near Krupa spring. It is easy to find it – starts right near the main water bottling plant and heads straight to the mountains.

The landscape is quite barren, rocky and inhospitable. Bura is harsh in this region and there is lots of snow in the winter. The road gets ruined by the water flowing but there seems to be someone taking care of it as it is in a fairly good shape. Nothing a proper SUV cannot cross anyways. Not for regular cars! 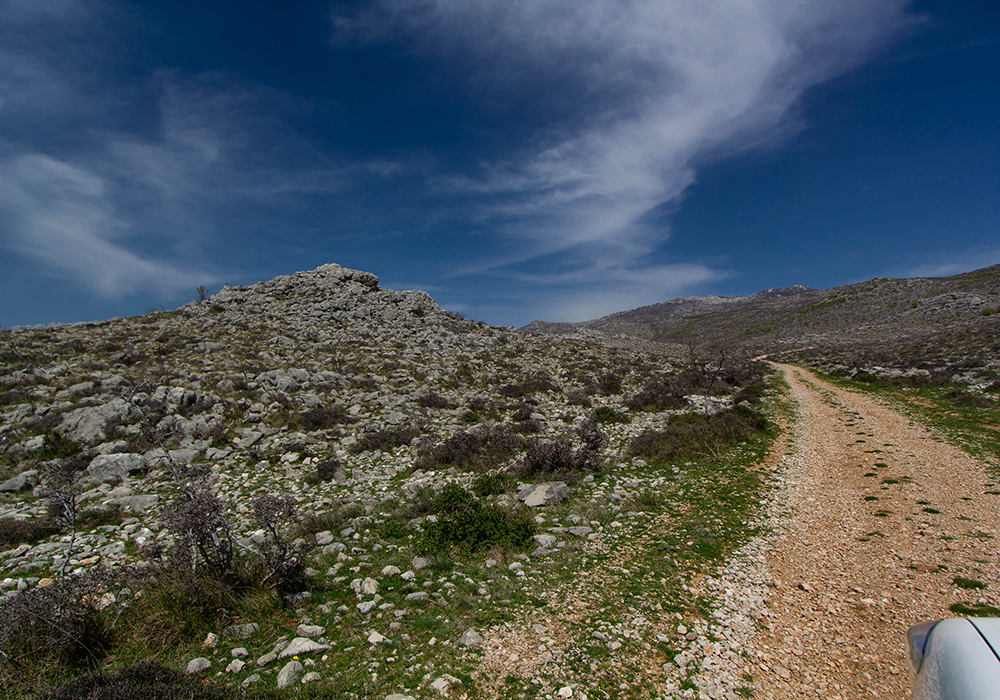 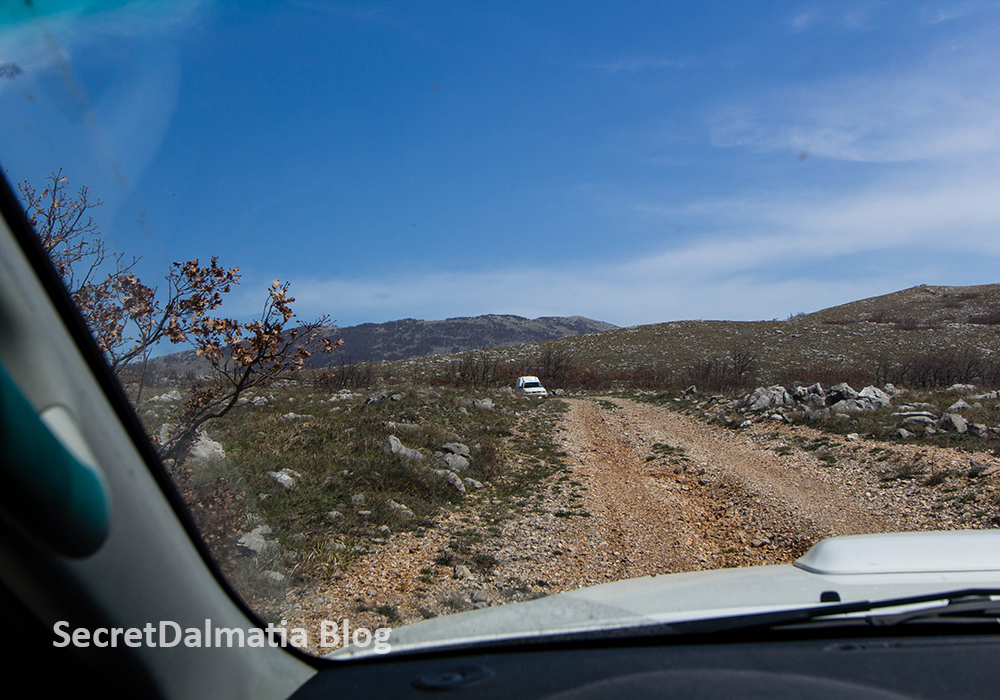 But then we saw a WV Caddy approaching! We just passed him but noticed that the driver was surprised as we were. Obviously, we were on a good road so we continued further up the mountain where the landscape got more serious, mountain-like  and the the condition of the road worsened.

We were at the crossroads at one moment and had no clue where to go. Duboki Dol fields were to our right and one section – better looking – leading towards it but another section did not look that bad either. Had to even walk part of the road to make an educated guess at one point…

Luckily, the WV Caddy returned (followed by two SUVs, probably hunters) and we asked for the directions. What are the odds to actually have someone to ask for the directions! The guy was most helpful so we followed him for part of the road. It was the road to our left and from then on, it was “left, left, right, right” to get to the main road in Lika – if anyone wants to drive this.

The mountain offers stunning views but we stopped only for picnic lunch as we wanted to see few more places that day. 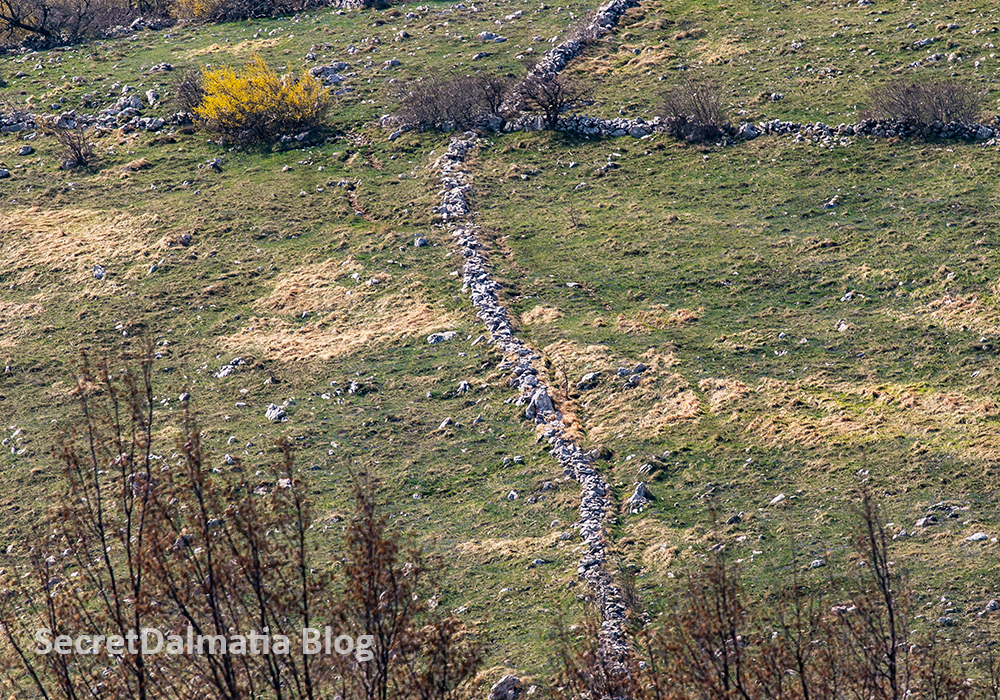 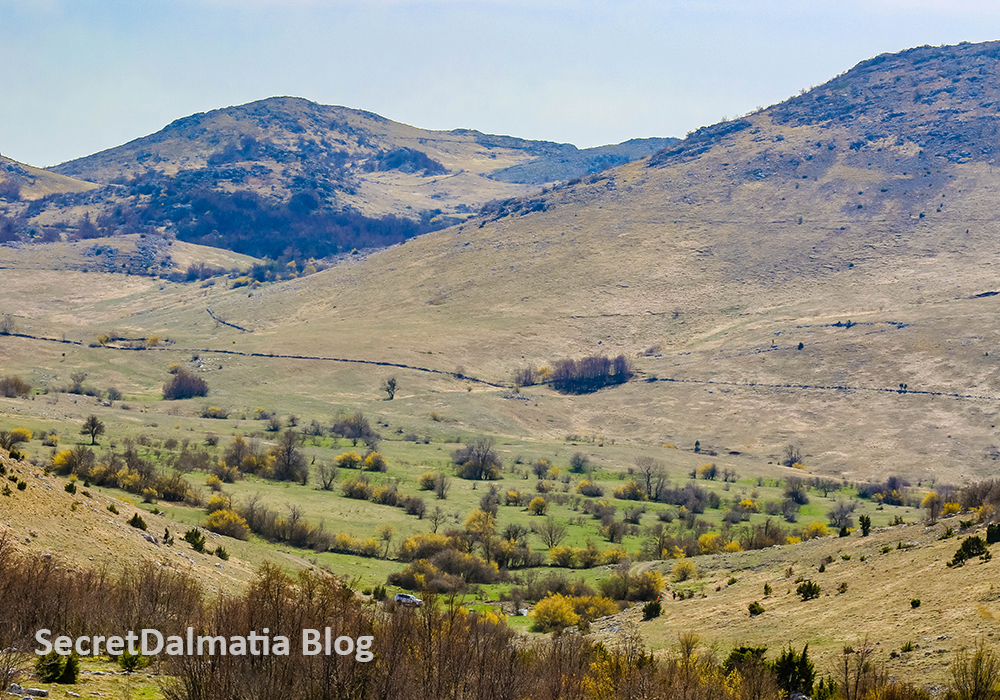 Soon we were across: at the Lika side of the trail. The road did not offer too many evidences of ancient traffic actually going this way but this is the easiest way to cross the mountain and there are plenty of wells and water holes along the route so it must have been busy back in the day. Archaeologists did some exploring in this area but plenty of work yet to be done as no guard posts have been located or possible settlements/gradina hilltop fortresses.

The landscape in Lika was typical for Velebit.

It was a great experience and the kids enjoyed running through the fields, echoes of the mountain, fresh air … Next time I plan to spend a whole day in the mountain and maybe do some bird watching as I hear some birds I never heard before. There must be some owls as well since Velebit is known for large ones.

Our next stop was supposed to be an ancient road near Knin but could not locate it so we continued to Mokro Polje.

It is a fairly large village located in a beautiful valley by Zrmanja river. It was predominantly Serbian (cc 1800 inhabitants back in 1991) and it is almost abandoned now with only about a dozen elderly living in few houses. 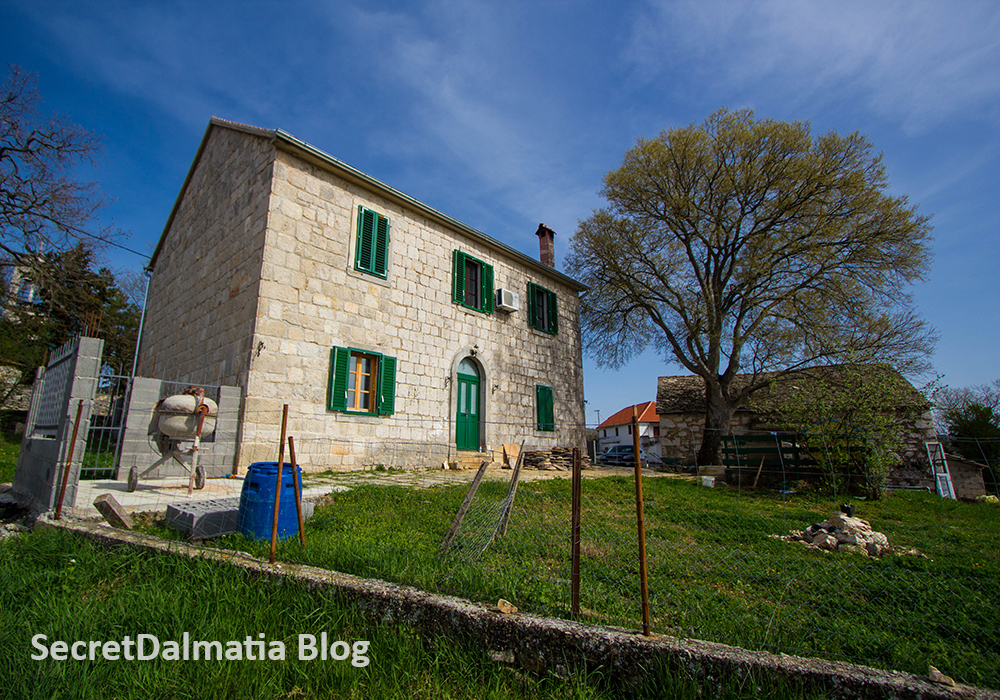 The village was probably inhabited by the Roman veterans after the Rome finalized the conquest of the region. Nearby Burnum military camp was de-militarized in 69 AD as Roman peace was finally brought upon the local tribes of Delmates and Liburnaes. The Morko Polje field is quite big and offers a great place to live. 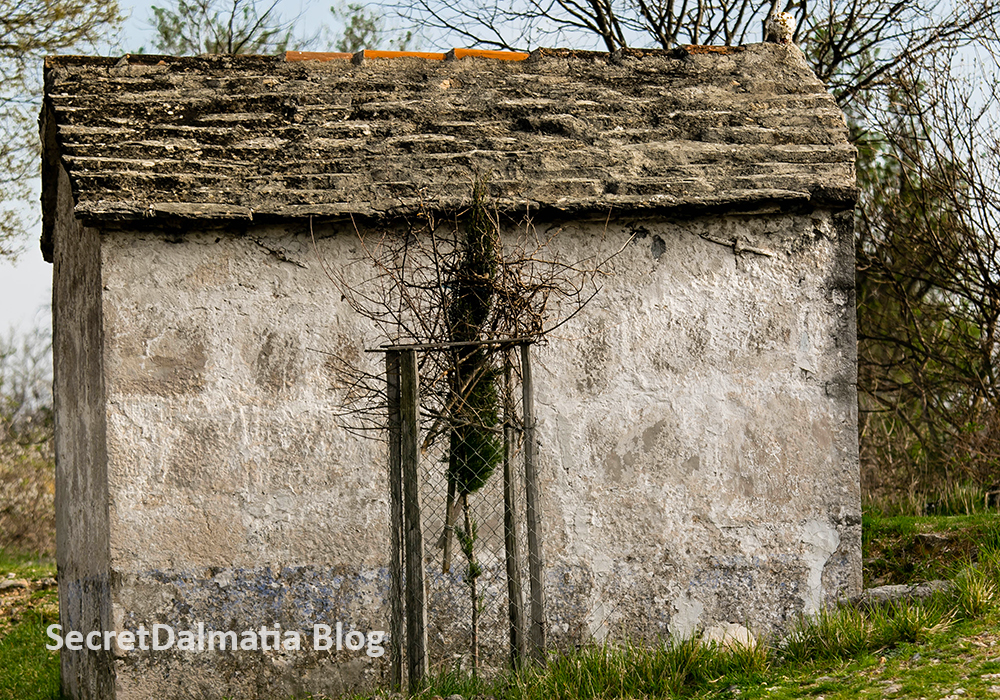 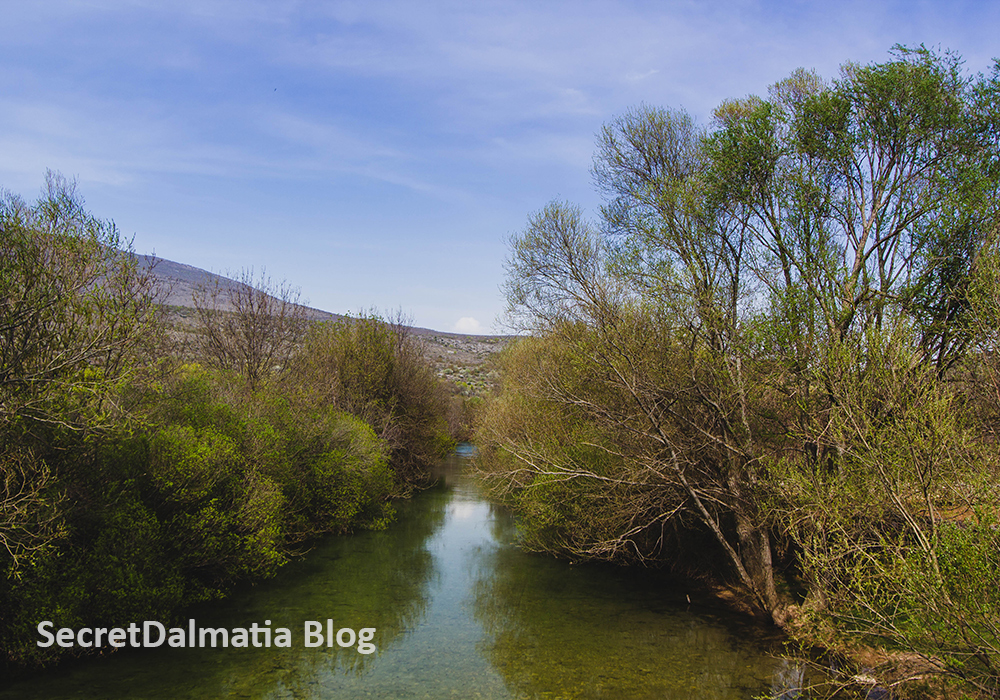 And beautiful Zrmanja river runs through. 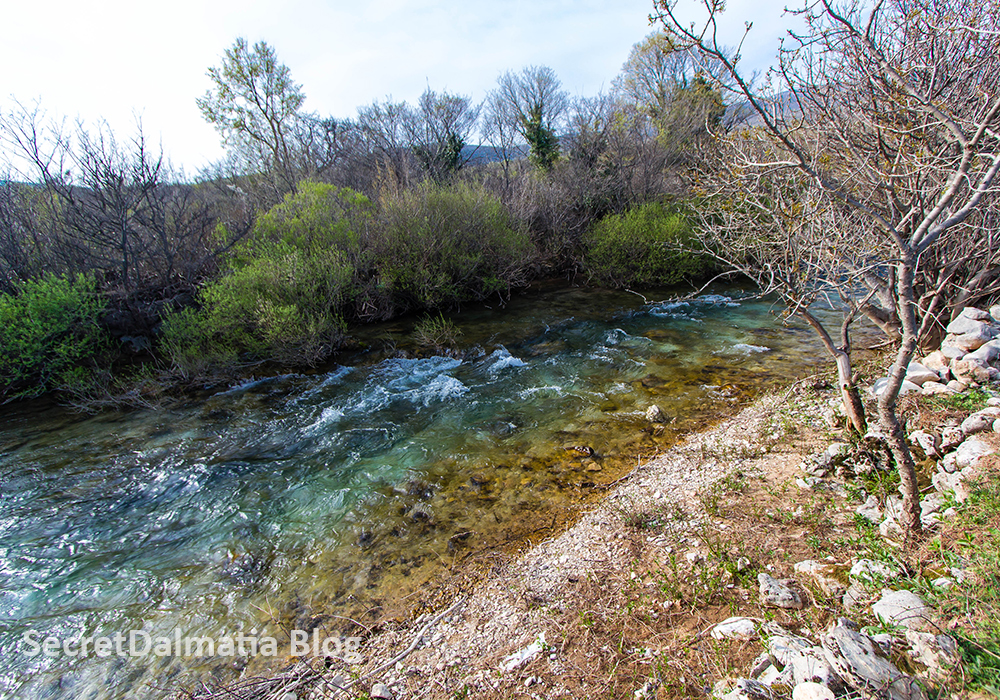 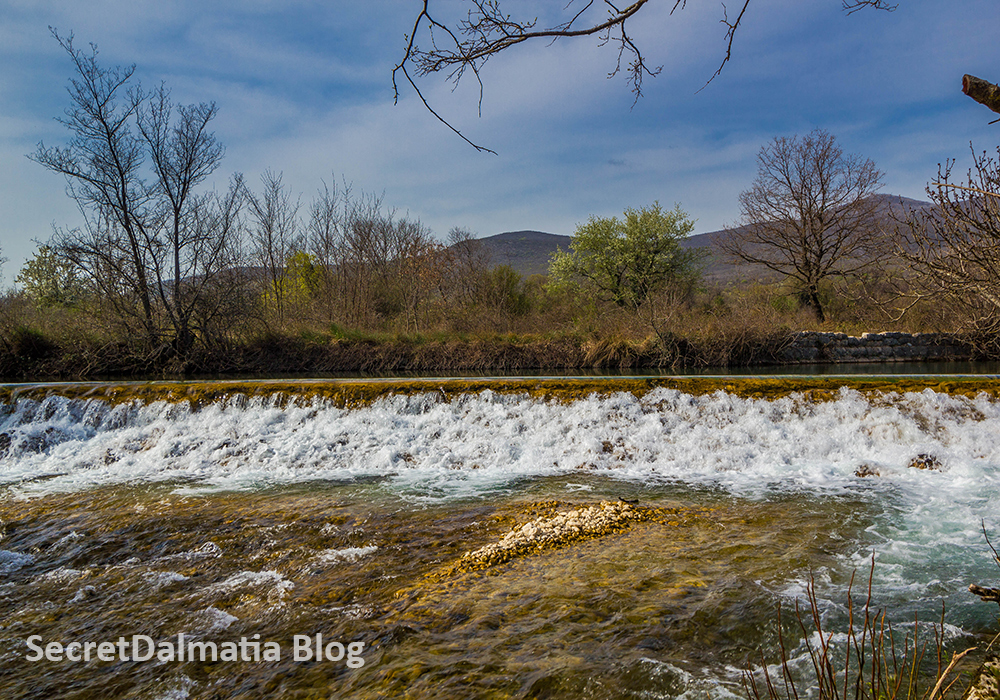 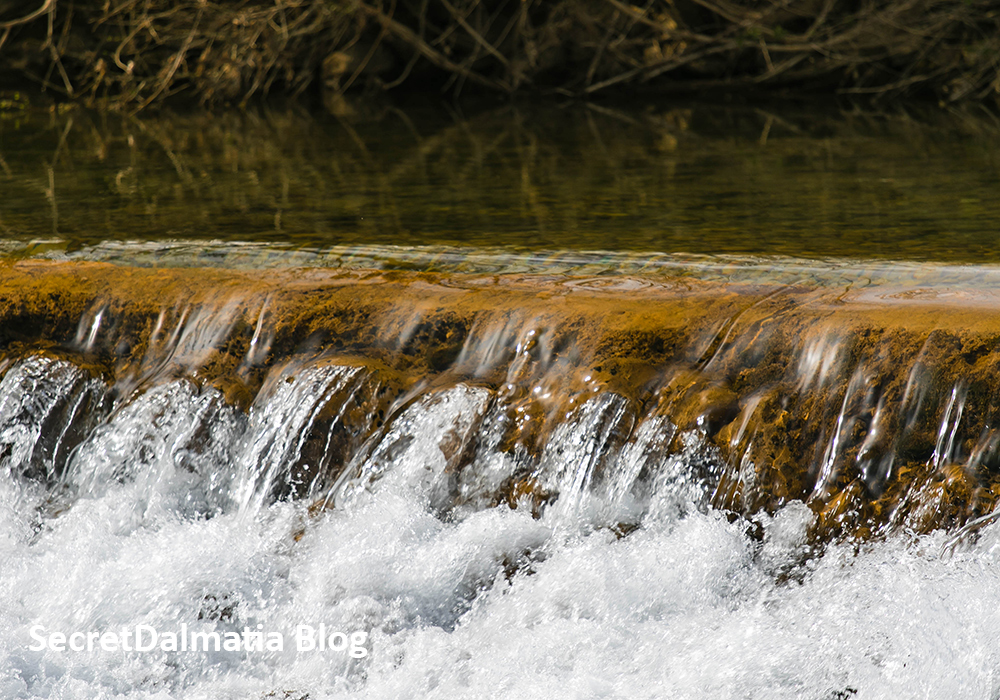 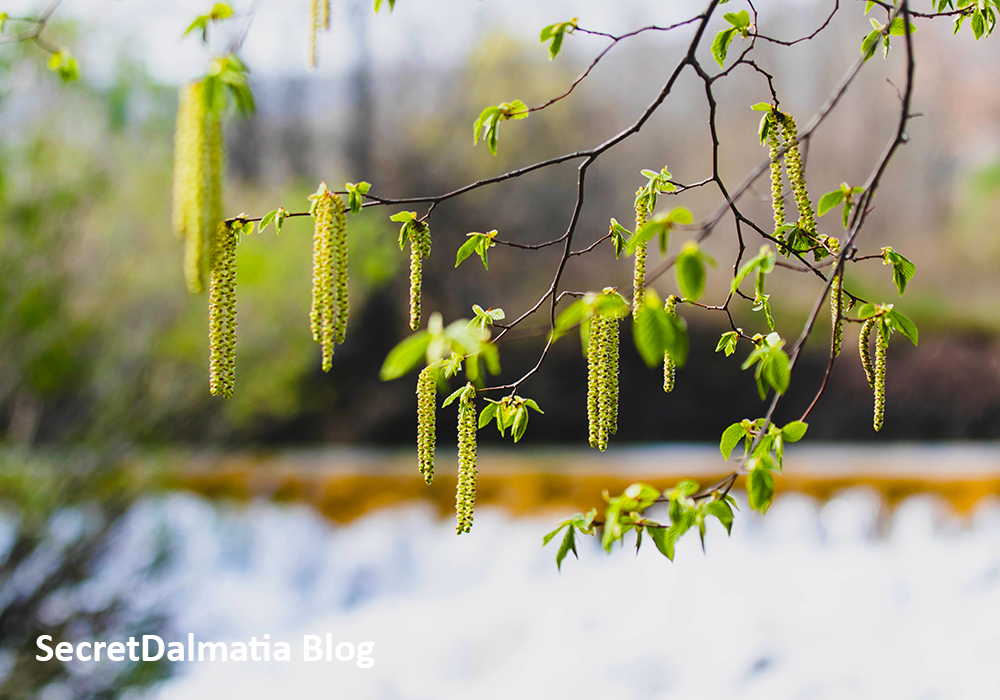 There is life everywhere. Except in the houses…

While picking asparagus, we met one lady who was just going to get fresh water from the river and she told us bout people leaving and how only few elderly ladies remain. Their little hamlet is further away from the main road and it is very picturesque with tall oak trees still standing. 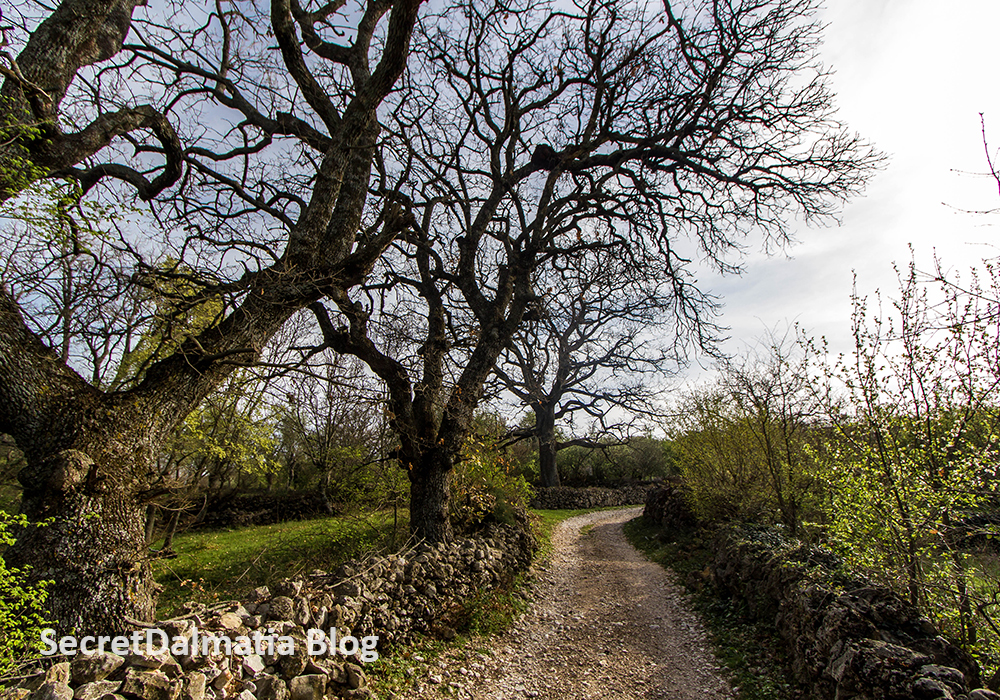 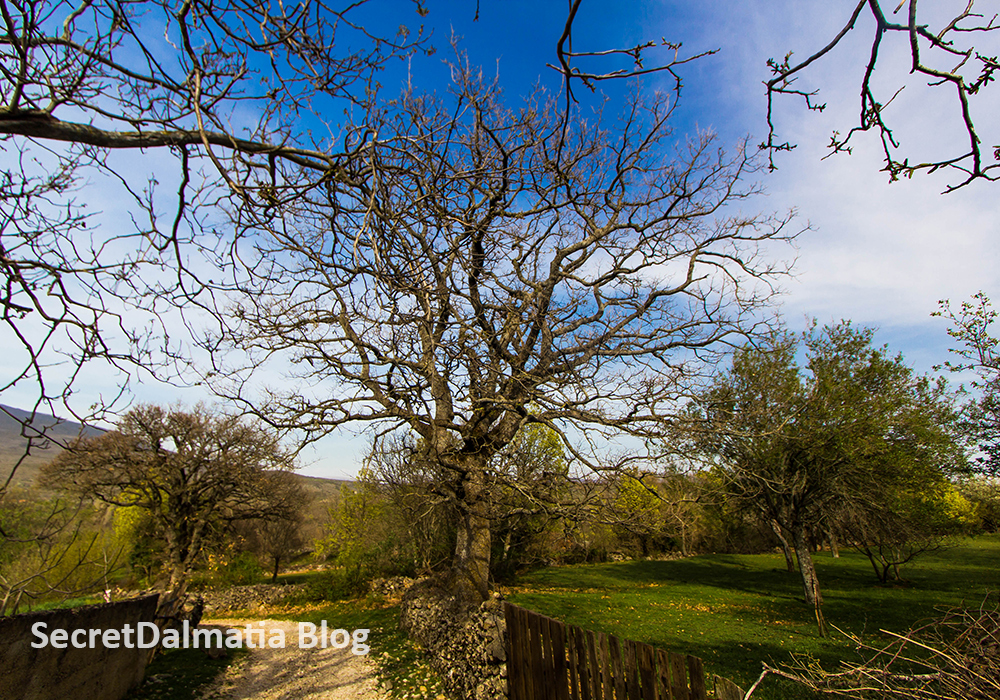 The old lady told us that someone was here looking for tall trees to cut them down but they did not let these beautiful giants to be cut down. Some people simply don’t have a heart 🙁

It was sad to see this lady (83) being the youngest in her village. But that is the destiny of many more villages in the country… 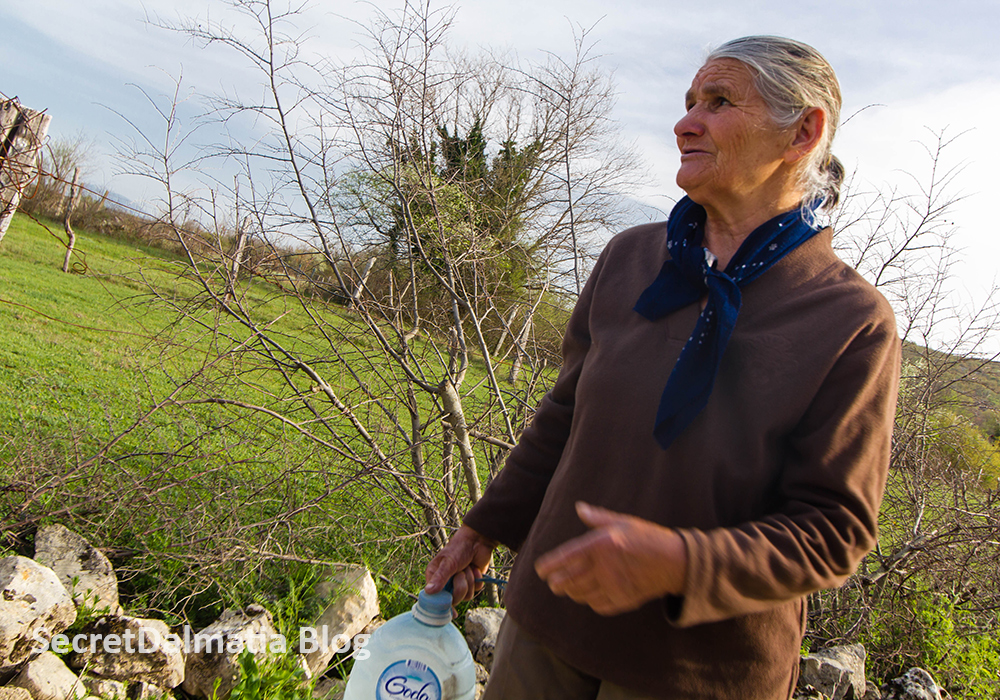 It was time to move on: with freshly picked 2 kilos of wild asparagus. We took another ancient road towards Ervenik. Views of Zrmanja were beautiful from almost every stop along the canyon. 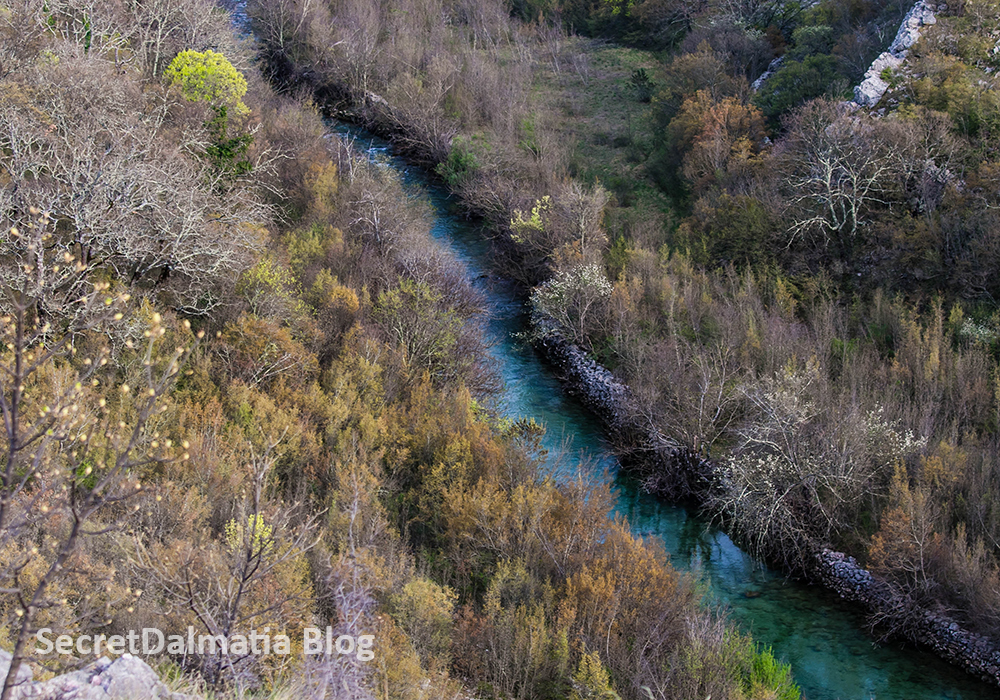 So life thrived along these roads for centuries during the Roman times and then, after the barbaric invasion, probably the entire region was inhabited for longer than that. The life came back with some Morlach settlers escaping the Turkish rule back in late 1500s but will end soon. And then? When will be the next time people move to Morko Polje to live? Never?

Everything will be left for birds and animals.Maybe it is better that way.