As the winter is gone, Easter holidays just behind us, we are all looking forward the beauty of Spring in Dalmatia, I am publishing one last winter blog post.

I love winter in Dalmatia although I don’t get to enjoy it as much as before. It has been quite busy and hope to have more free days in April and upcoming summer. I did not get to explore as much as last year and there are quite a few places still to see and visit. The basic plan is to cross every road, to drink from each spring, to climb most of hills…

Zadar hinterland I have covered quite a bit in the past years and have only few more areas to visit to wrap it up. One of the areas I am constantly visiting is Bukovica which is one of my favorite areas in all of Croatia. There is something quite unique about this rocky, inhospitable looking region… 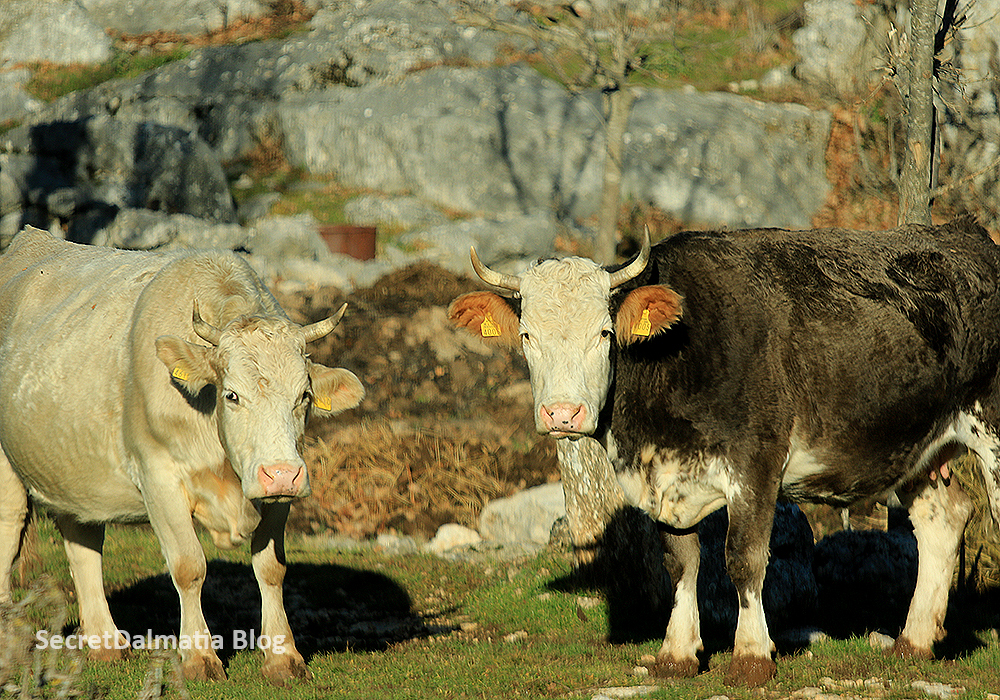 There is an ancient road leading from Medviđa to beautiful Žegar field with one side road that I never explored. So, this winter, curiosity won and I made a sharp right to Komazeci hamlets. The entire area was greatly devastated in the past war so very few people live here. Most of them are breeding cattle and cows are often seen on this road.

The Sun sets early in these hamlets as they are behind a high hill. In some of these hamlets, only sheep can be seen and I certainly hope that there is someone to lock them up as there are plenty of wolves roaming in this hillside! 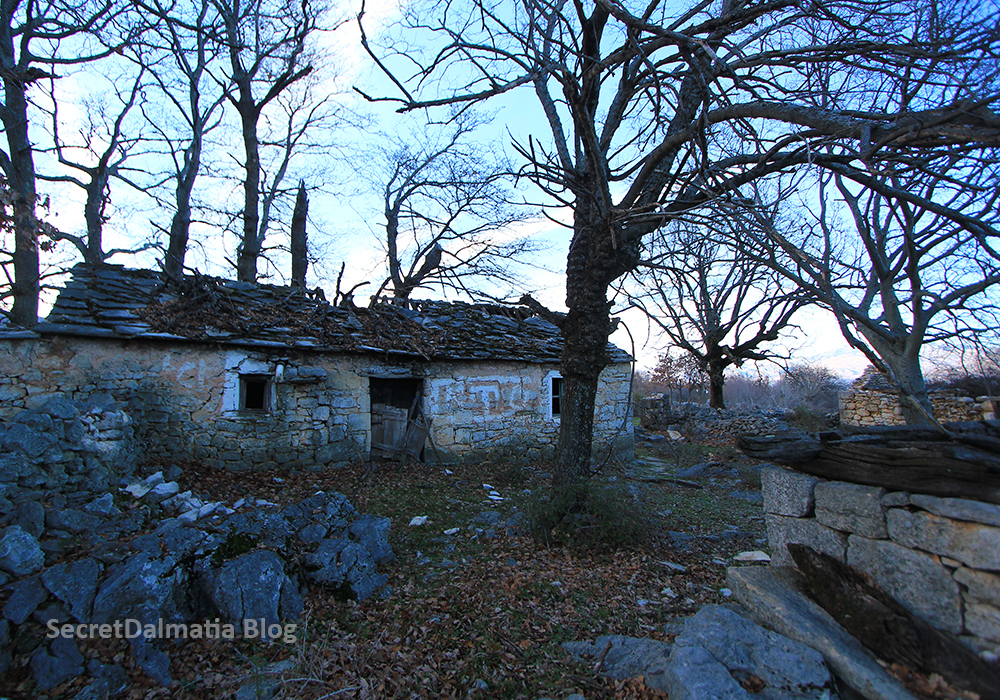 It is peaceful and quiet. Only birds can be heard but we also heard some gunshots!

Italian hunters, with local hunters, often hunt in this area. There are reports that some of them illegaly hunt singing birds but I hate hunting no matter what is the prey… I wish all those activities are banned in the country.

The area is beautiful in Spring and cannot wait to revisit in few weeks when everything is in bloom!

All these drives are awesome off road experiences! Not so demanding in terms of mud but quite scenic and interesting for good off road vehicles.

Gornji Karin
The area of Karin is another one of my favorite areas and just perfect for exploring as it hides several abandoned villages and historic places. One of them is a tiny, abandoned hamlet of Ćose. Hard to reach, it is now visited only by some cattle. 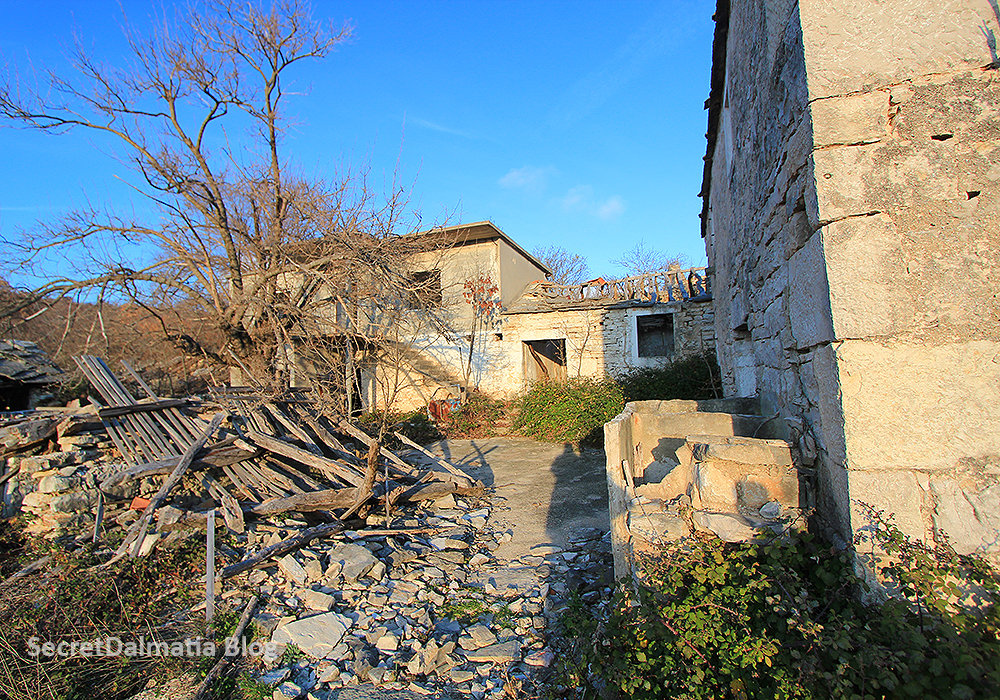 There is an old family complex in one part of the hamlet. It is made with great skill although most of these complexes have been ruined during 60s and 70s with concrete adaptations. Originally, they are all made of stone and some of the houses are quite impressive! The eternal beauty and harmony of old buildings has not been match in modern architecture of the region. And that is sad. As most of these places are now in ruins… 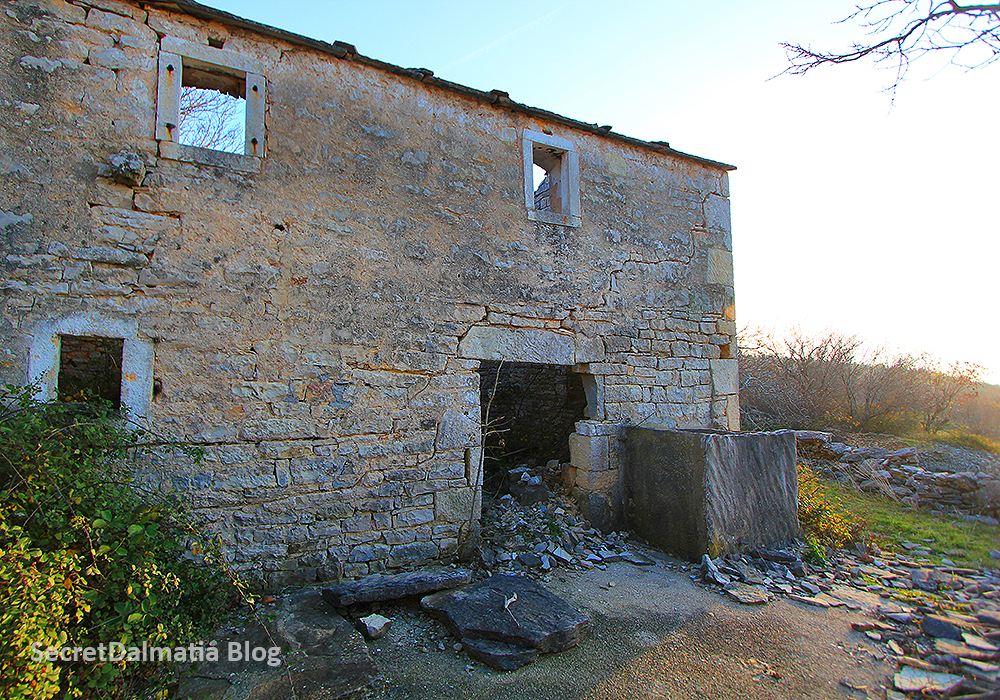 Especially impressive is an ancient oak tree near the village. It is a tree of myths and legends. The center of life of this village directly connected to the land where generations lived and died. The place where ghosts are still present. Good spirits of the past still can be heard whispering through the bare branches of this magnificent tree.

On another occasion we went to another hamlet. Lakići is also abandoned and all in ruins. 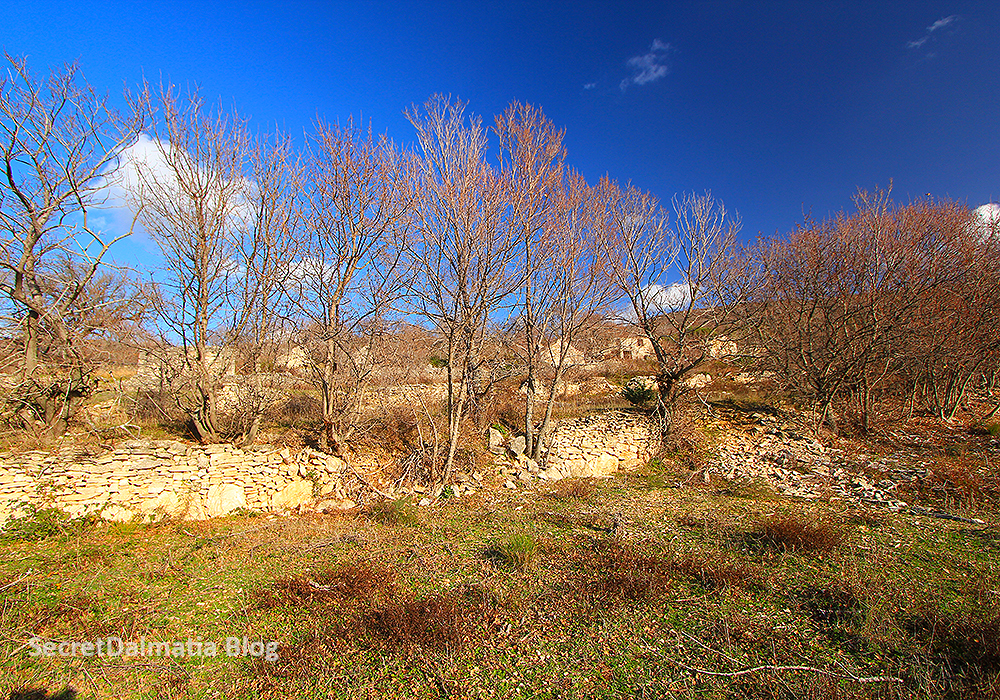 I had a drone with me and took some nice aerial shots although winter is not the best time for taking photos. However, the trees are without leaves so one can capture all the important details. The village is filled with beautiful, traditional North Dalmatian architectural details at every step. 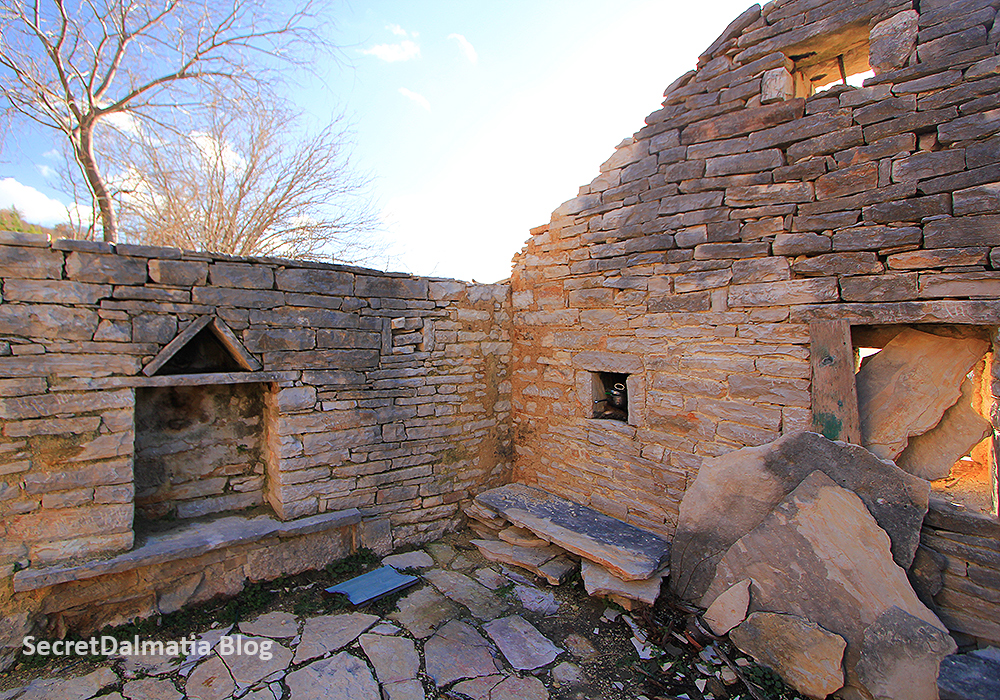 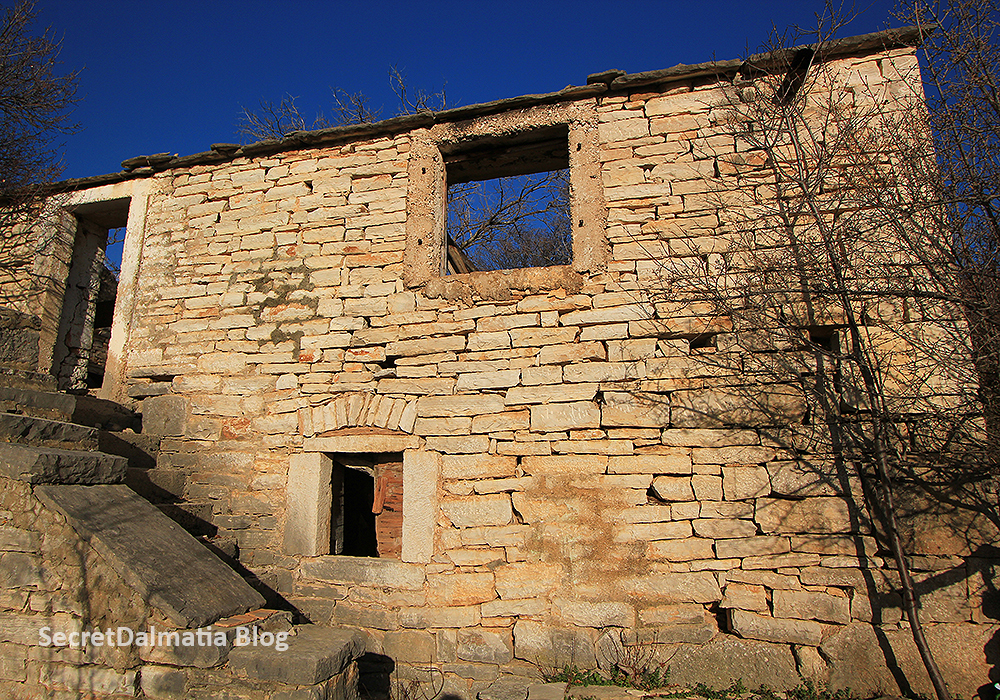 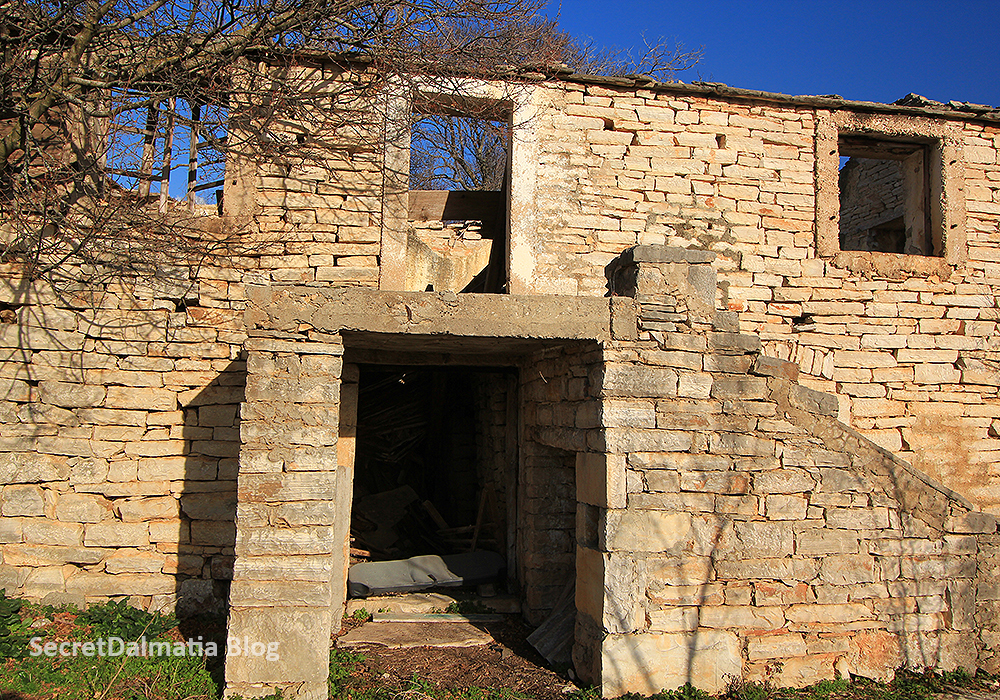 Some of the huts are still covered with stone slabs but, since they are not in use, they will not stay covered long… 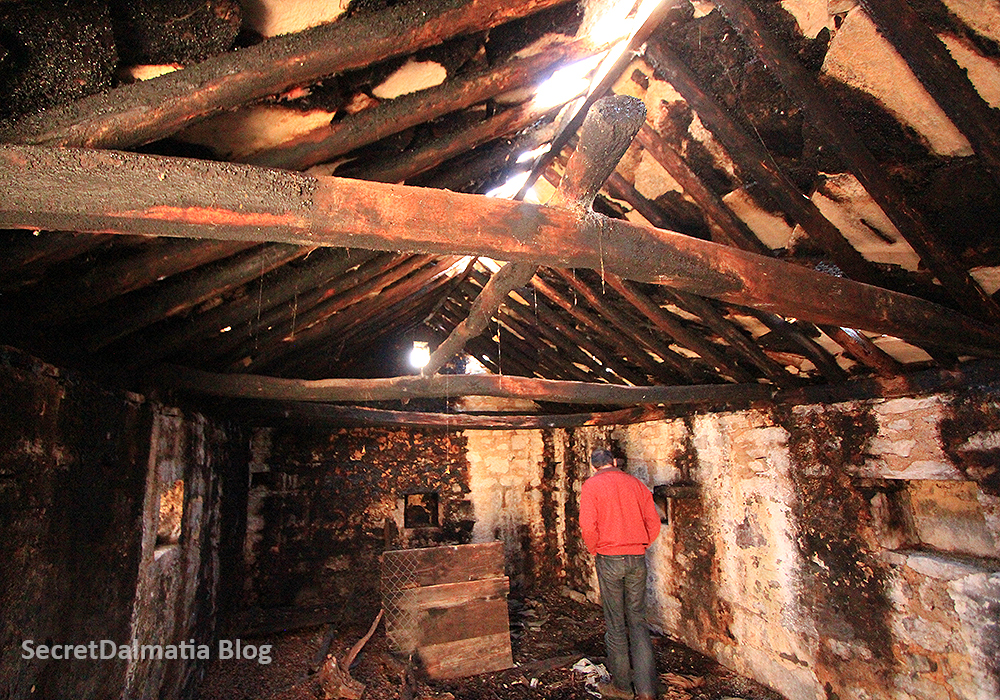 When planning a trip here, I have noticed that there may be an interesting canyon near by. We were not prepared for a gorgeous and deep canyon only a hundred meters away from the village as there are no rivers nor streams!

We continued down the road to Karin. I am not a fan of it. It is likely one of the most devastated places in the region but the entire bay, called Karin Sea is not the prettiest part of the coast for sure. We went to see one ancient gradina hilltop fortress but were stopped before we got too far from the car.

One local guy wanted to warn us off his dogs nearby. We were not planning to go there as it was in the opposite direction but his presence was helpful as he has some serious dogs in the bushes! The guy, Ivica, moved here after the war and he showed us several wounds he suffered back in early 90s.

He is originally from Županja and now lives, with his family in Karin. And breeds dogs. He has 10 šarplaninac dogs in one field. Šarplaninac is also known  Illyrian Dog or Dog of Sharr Mountain and is a famous Balkan breed. It originates from the border region of Macedonia and Albania and it was a common guard dog of Balkan shepperds and also a service dog of former Yugoslav army. The pride of his selection is a massive Medo. The dog is so vicious looking that even Cujo looks cuddly compared to him! Luckily, the chain is quite strong and he could not get to us!

The spring is almost here and new adventures await. Plenty of great places to see, rivers to cross.