It is always a pleasure to go across the border to Hercegovina- a region full of amazing places and sites. Especially when friends organize it and we have Mr. Ante Vujnović as a guide. Ante is a director of Radimlja archaeological park near Stolac and the best person to show us around. He is very dedicated to preserving historical heritage of the region. Hercegovina, although being part of Bosnia and Hercegovina, culturally and historically cannot be separated from Dalmatia despite the borders set by Austrians in the 19th century.

Stolac, due to its troubled past – both recent and distant – offers a variety of unique sites to explore and visit. From the very unique necropolis of Radimlja to the fascinating walls of Daorson and the Stolac fortress.

Our first stop and the meeting point is usually Radimlja necropolis. Numerous pages have been written on the stečci monuments and this particular site and you can read more on Radimlja and other historic sites of Stolac region on the official UNESCO web site: http://whc.unesco.org/en/tentativelists/5282/UNESCO

This past year, stećak monuments have been listed with UNESCO as the World Heritage and that includes all the monuments in the region of Balkans – over 70 000 known monuments!

Bosnia and Hercegovina today holds the most of these unique monuments with Radimlja and Boljuni near Stolac being the most decorated ones.

The necropolis did not change much although the Austrian built road going to Stolac split Radimlja in two parts and destroying about 15 – 20 monuments. The landscape has changed significantly and, today, there are several modern buildings and warehouses a bit too close to the necropolis… 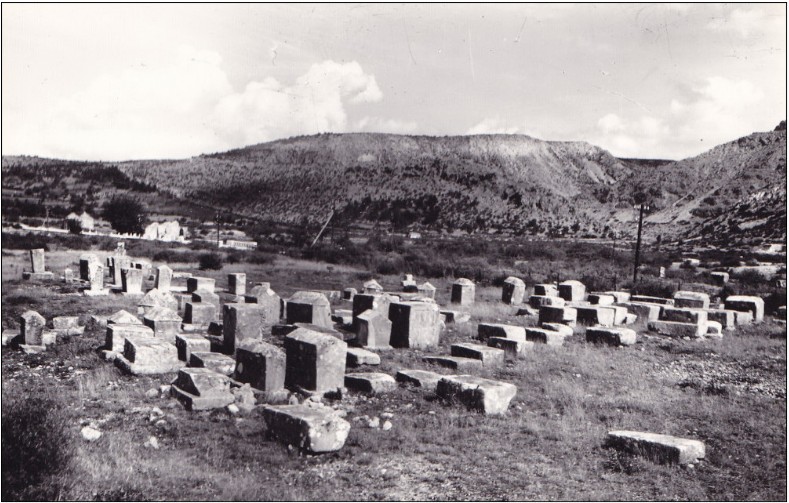 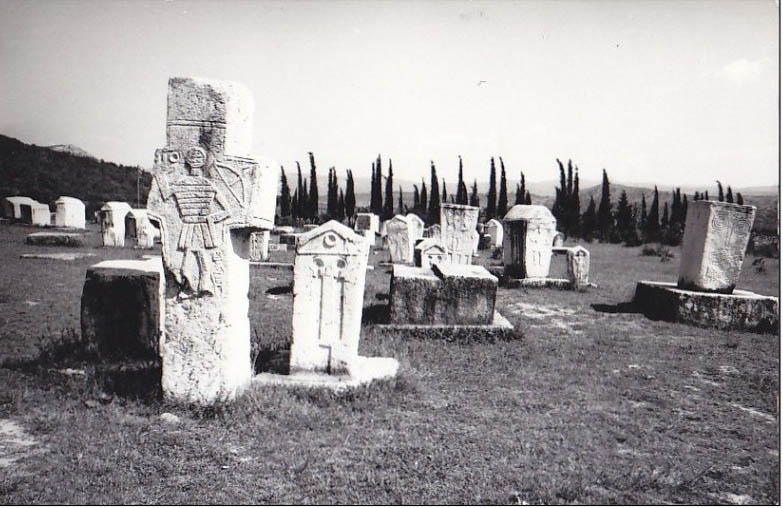 The monuments have been cleaned some years ago loosing that historic patina seen on old photos. Of course, it will form again with time. 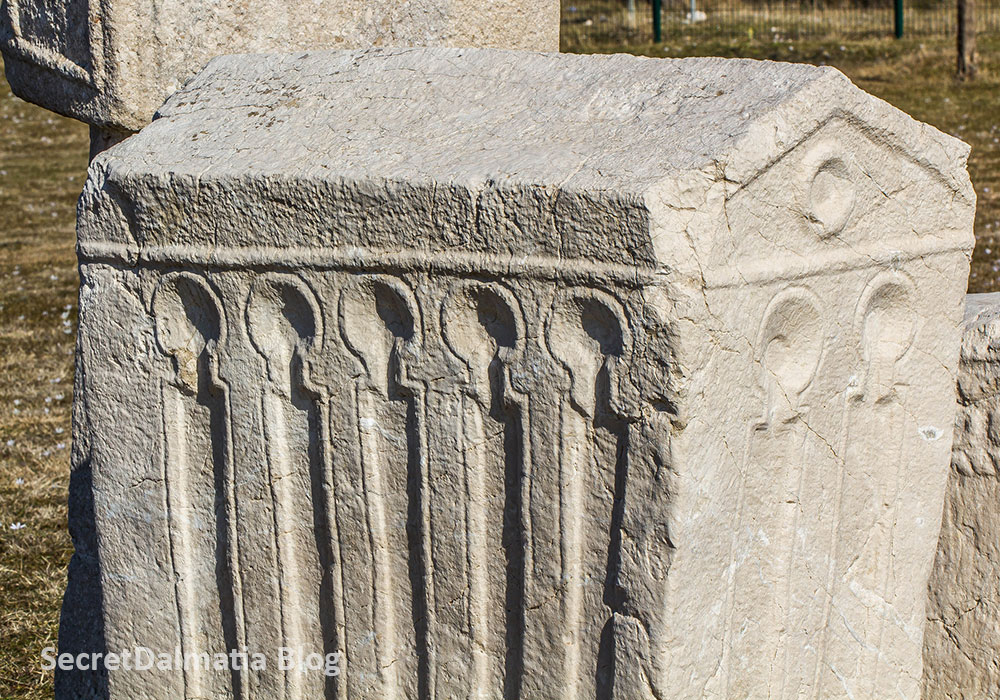 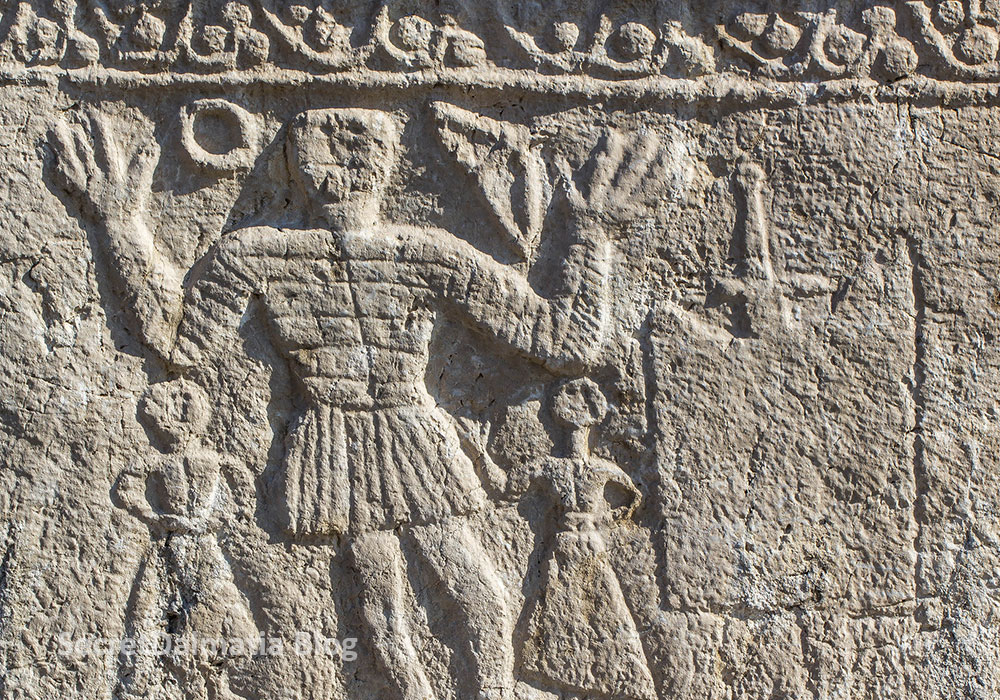 Monuments have various decorations but Radimlja has the greatest number of human figures. Hunting, dancing, fighting… life as it was back in the days when they were carved. Most of the monuments have been carved between 1200s and early 1500s when the Turkish conquest completely changed the life in this part of the world. There is a controversy as some people consider these monuments to be much older but there is no evidence for that and, especially the ones at Radimlja, have been well documented and connected to the local, medieval noble family.

The next stop for our small group was the mysterious Daorson. Actually, quite a bit is known of this place but there is a lot to be discovered as only limited archaeology research was done in a single campaign almost 50 years ago. 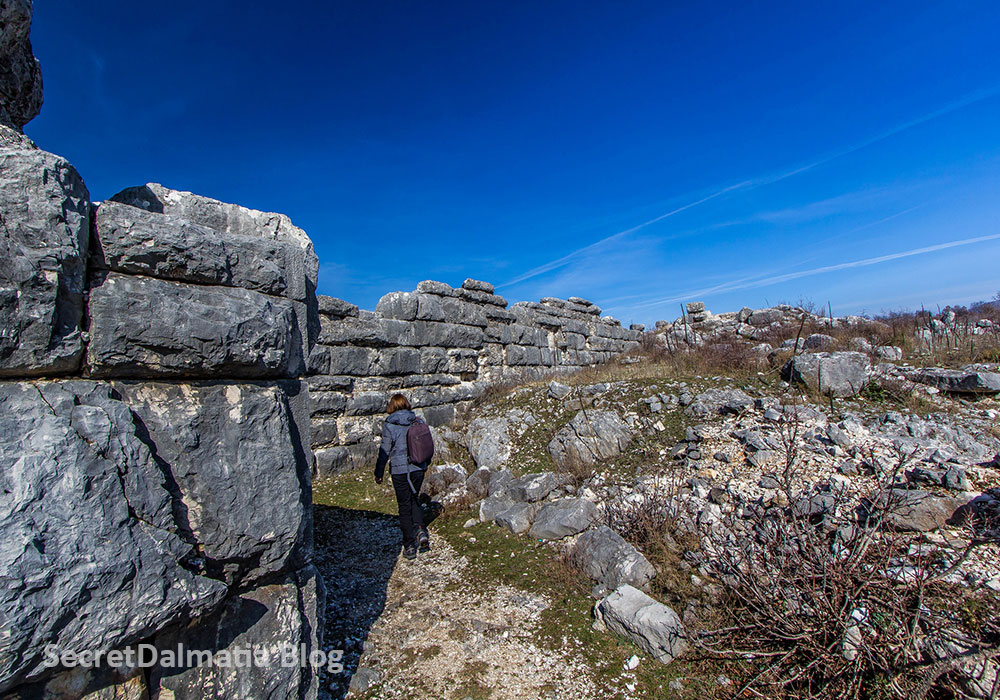 This impressive hill fort was built on a prehistoric fortified settlement which was dated to the early 17/16th century BC and existed to the end of the late Bronze Age: 9/8th century BC. The final destruction of Daorson is dated to mid or second half of the 1st century AD and we know this from the details of the Roman wars against the Delmati tribe that lived here at that time.

Today, Daorson is still very impressive with its unique megalithic walls surrounding what is believed to be the religious center/refuge. 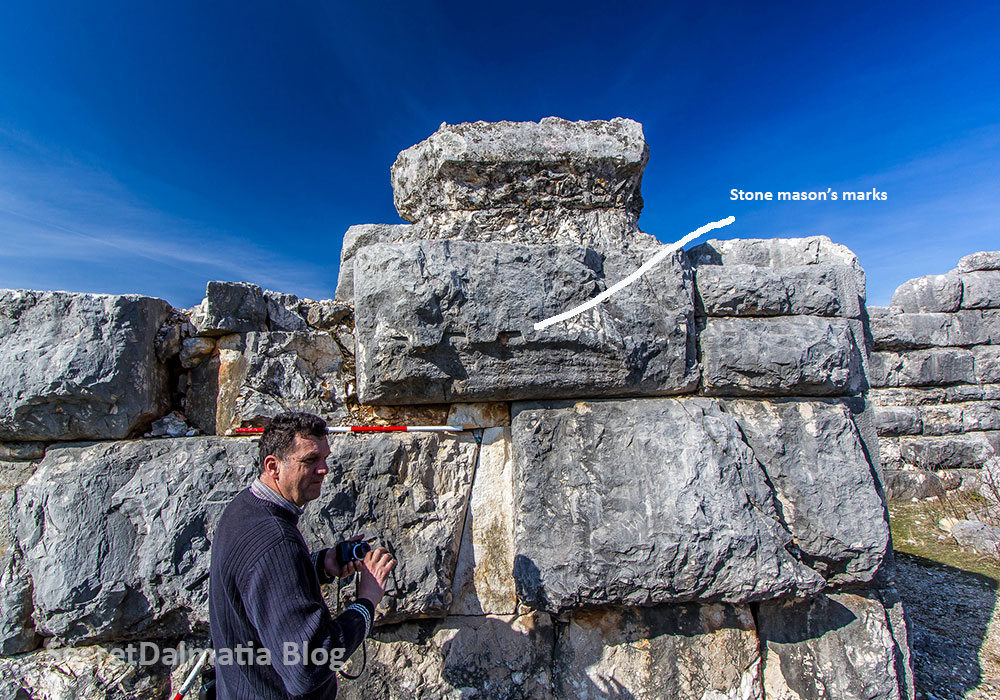 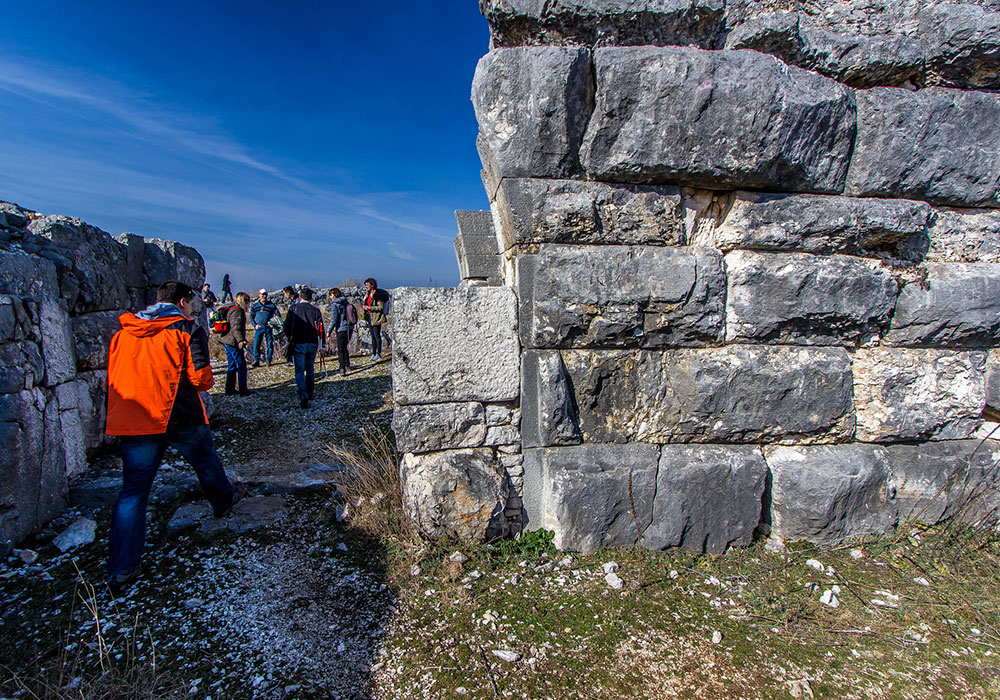 Besides Ante as a local authority, we had some proper archaeologists with us so we learned a LOT! And learned a lot about the hard-to-see defense structures in front of these massive walls, numerous graves and bases of ancient houses…

Basically, this is what the plan of Daorson looks like: 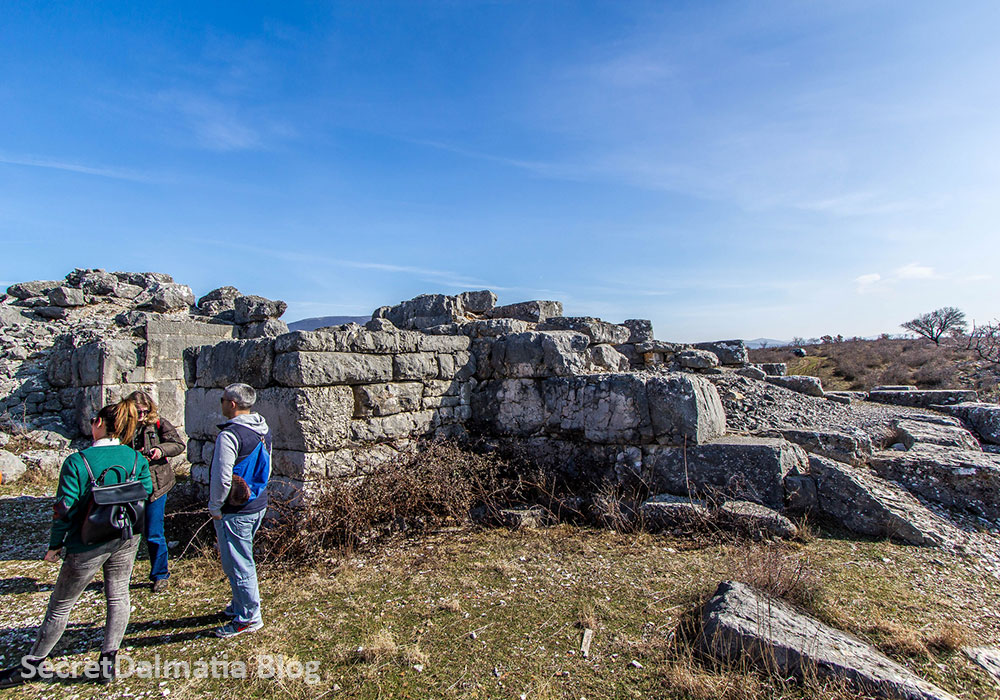 Daorson was built from the rocks from the nearby quarry and we took a short walk north to see what it looks like today. 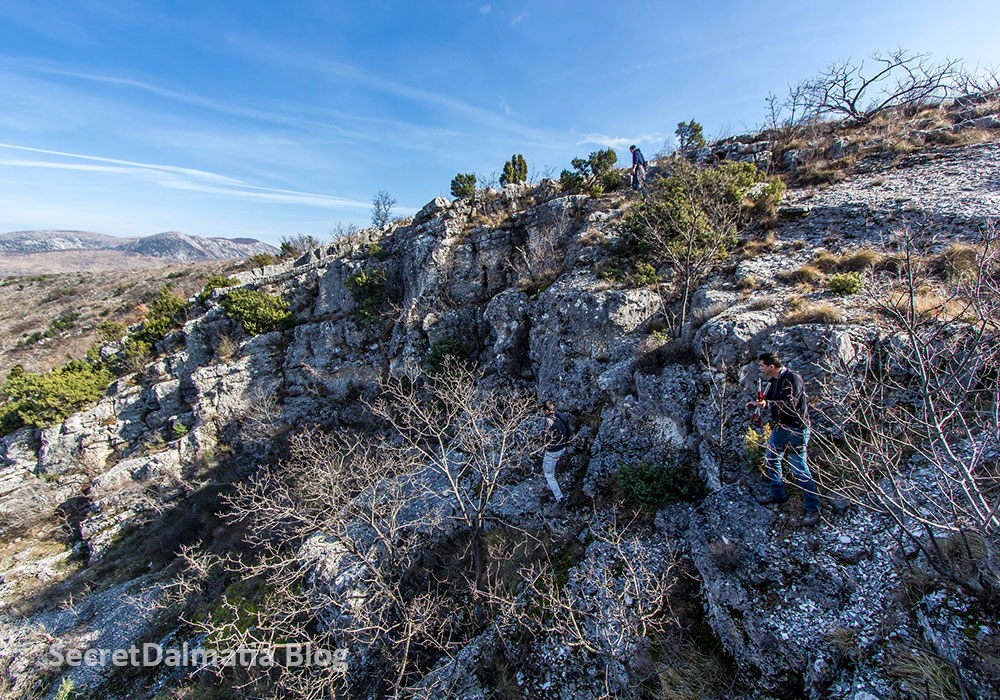 One can learn more on Daorson and it’s Hellenistic traditions from this paper (in Croatian): http://hrcak.srce.hr/file/118555

I also found a small piece of pottery just lying on the side looking completely unimportant: 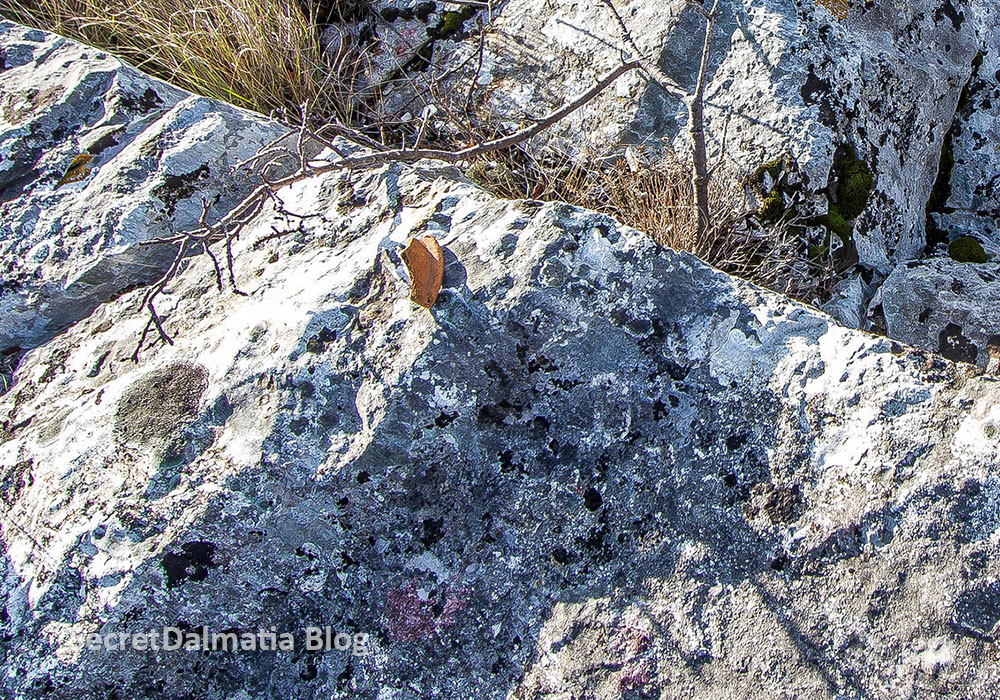 But, with us, we had Mr. Miro Katić  (of Trogir conservation department) who has a PhD on Hellenistic pottery and immediately attributed this small piece to Pharos colony – a Greek colony from Hvar Island that existed at the same time as Daorson and, obviously, had a strong connections with this area. Connections were numerous and Daorson was a very prosperous community at its heyday.

Next stop: Boljuni
The necropolis in Boljuni numbers 274 stećak tombstones, 92 of which are decorated and 9 of which have epitaphs, making it one of the most interesting necropolis in the area. 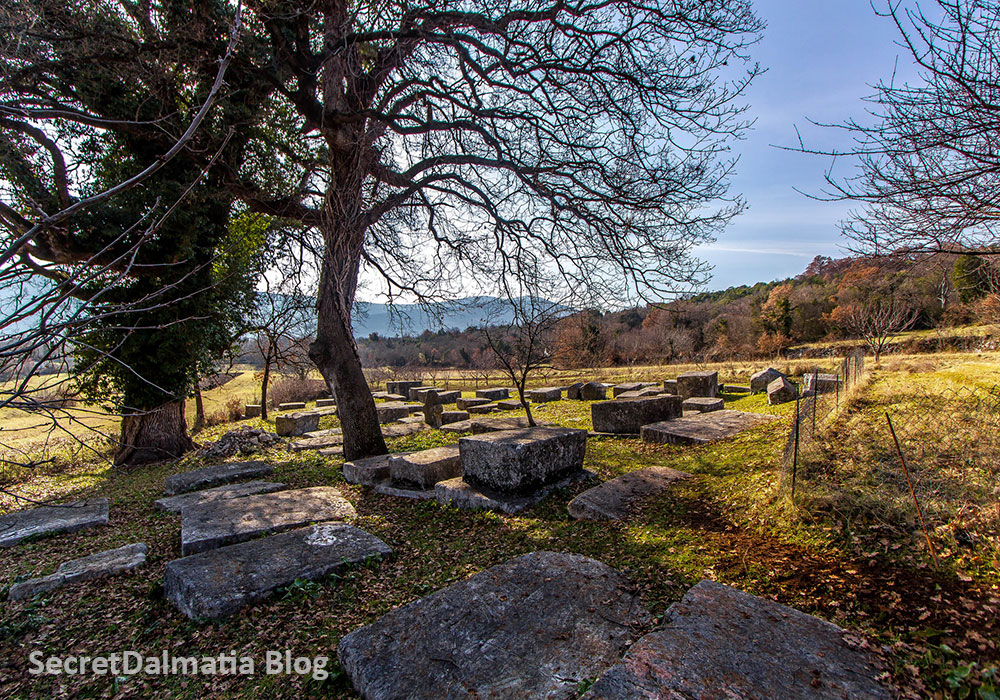 This group of monuments is quite well preserved and with several unique decorations. One of the monuments even depicts some strange monsters/dragons: 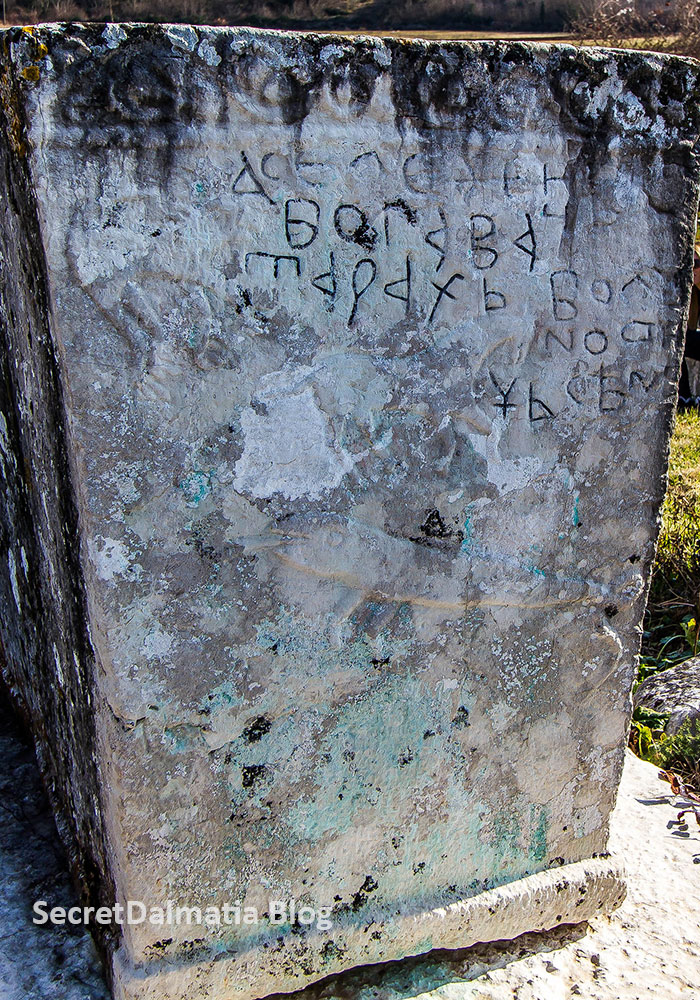 But most have simpler decorations and ornaments.

Boljuni is a very fascinating place well worth visiting when in the area!

And then it was time to finally visit Stolac. This very historic town is known for the impressive fortress on the hill over Bregava river shown below on numerous historic images. 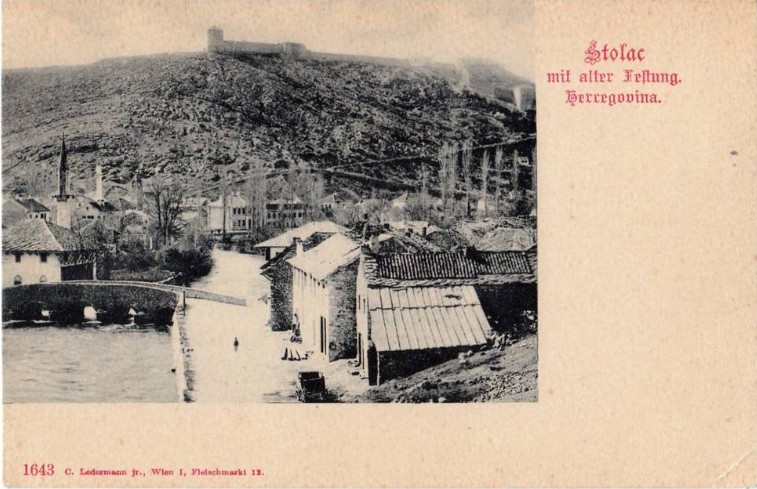 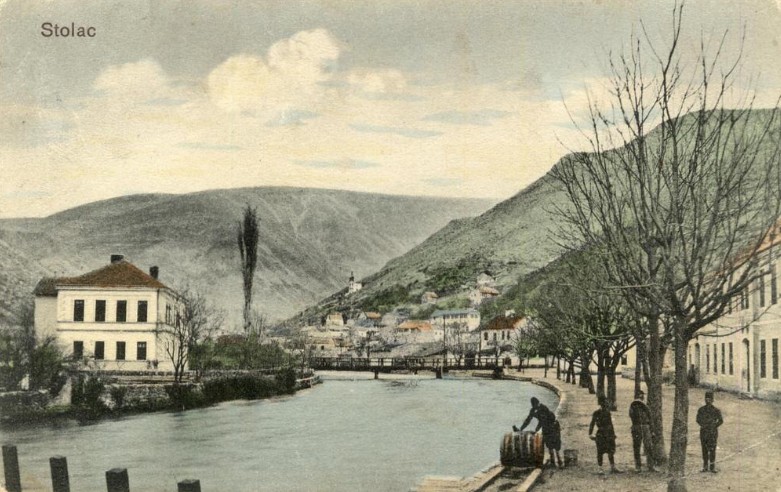 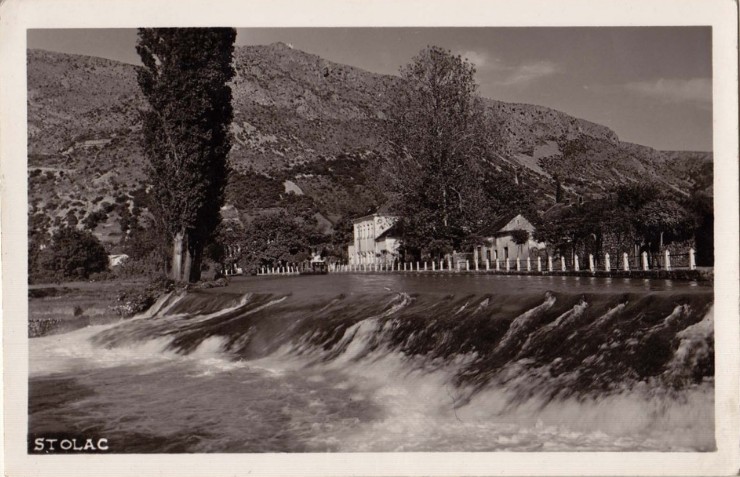 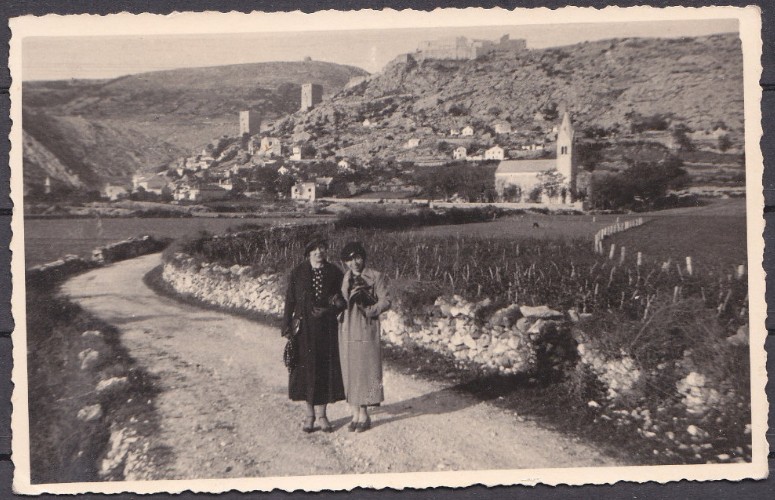 Fortress is a bit of a climb but well worth it as the views are stunning and the fortress itself is impressive example of medieval fortifications in this part of the country. The earliest reference to Vidoški fort – as it is called – is in a charter dated 1444, followed by a series of charters up to 1454, as the possession of Stjepan Vukčić Kosača. Stolac became part of the Ottoman sultanate following the Ottoman conquest in 1465. And that changed everything as the introduction of a new religion divided people and that division continues till modern days… 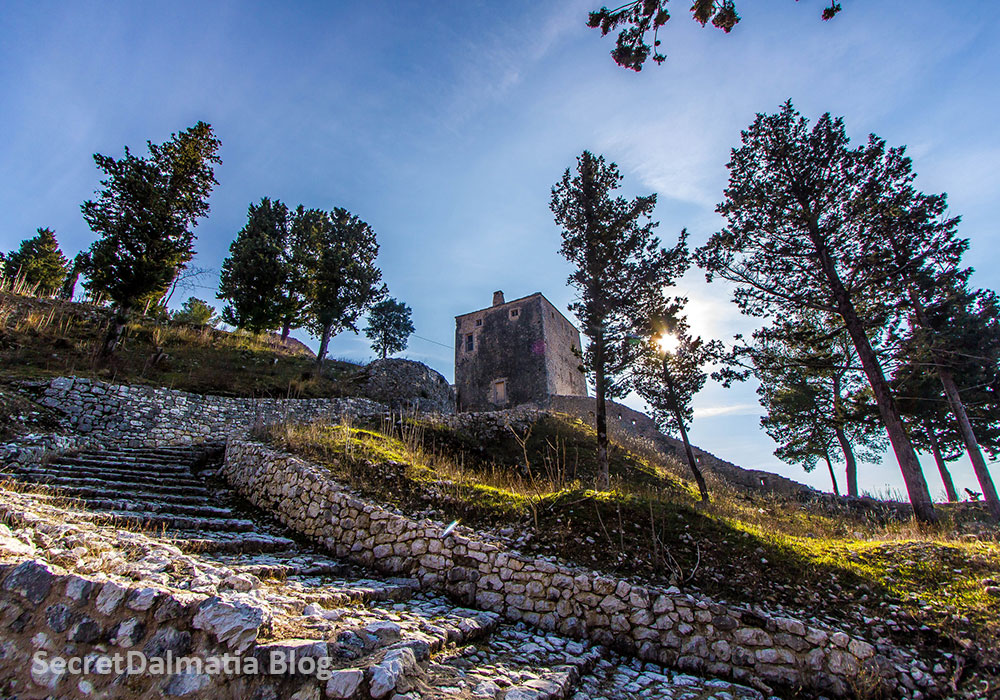 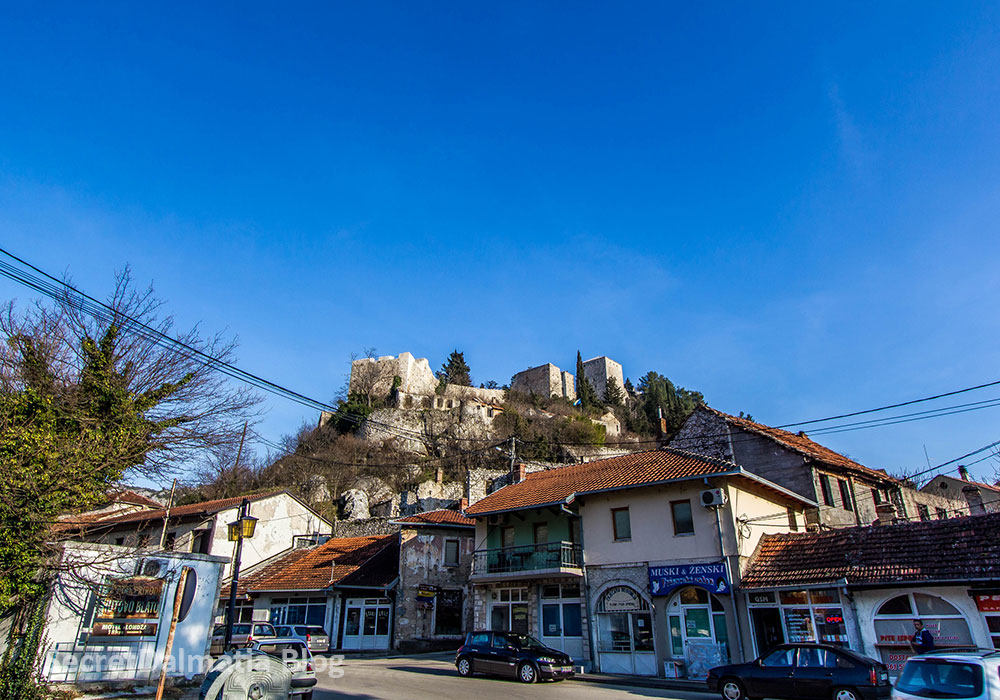 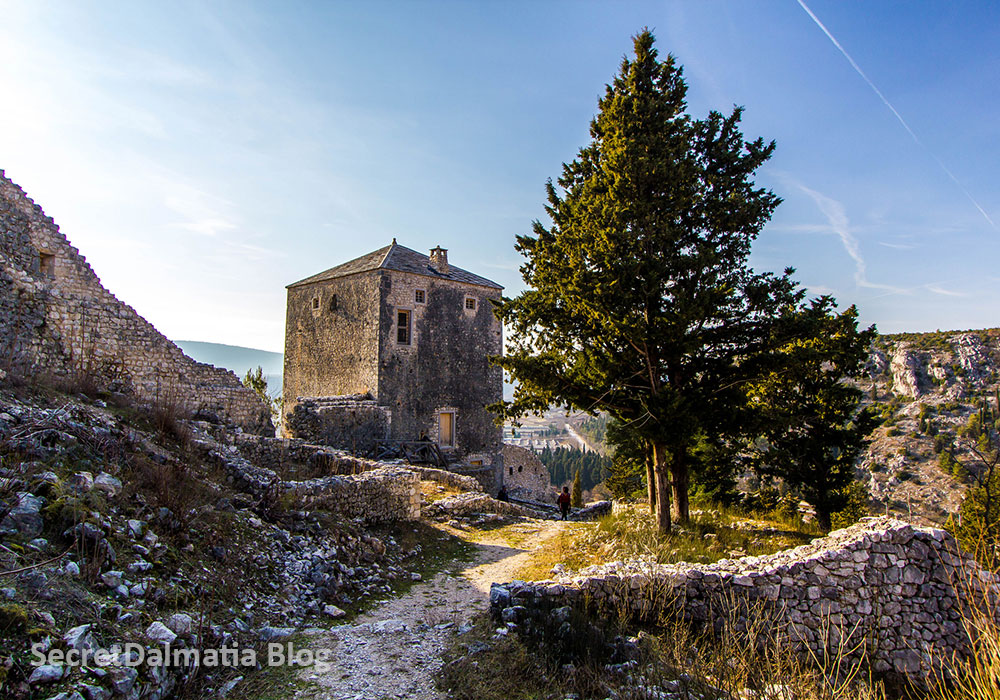 Inside the fortress, there is still quite a bot of work but, generally, it is in good shape and the effort to preserve is quite visible. This is also a location where Stolačka Tarča is taking place – a medieval fair with emphasis on education and traditions of the region. This event takes place in May.

Best description of Stolac today would be: “a sleepy town by Bregava”. It looks very lovely from the Vidoški grad fortress: 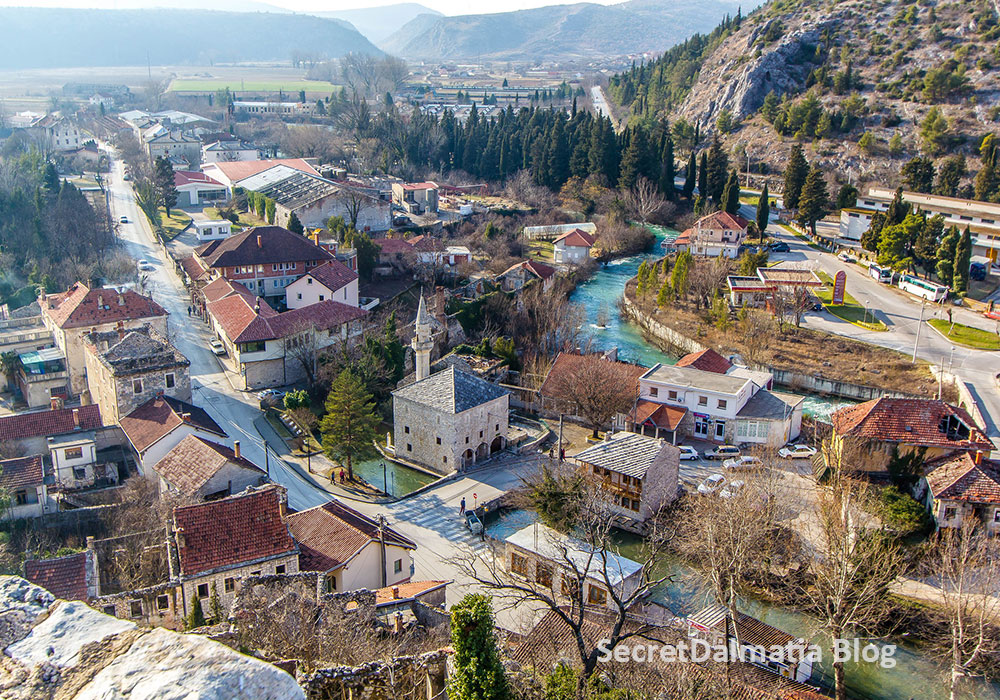 But the walk through the town reveals all the tragedy of the recent war in Bosnia and Hercegovina. Many houses have not been restored and many more, due to emigration from the area, are collapsing. Today, the peace is just on the surface as both Croats and Bosniaks are trying to patch the wounds from the war of the 90s. The scars are still quite deep. Visiting the Podgradska mosque, we were approached by an elderly Bosniak telling us few things about the mosque and the local Muslim traditions. 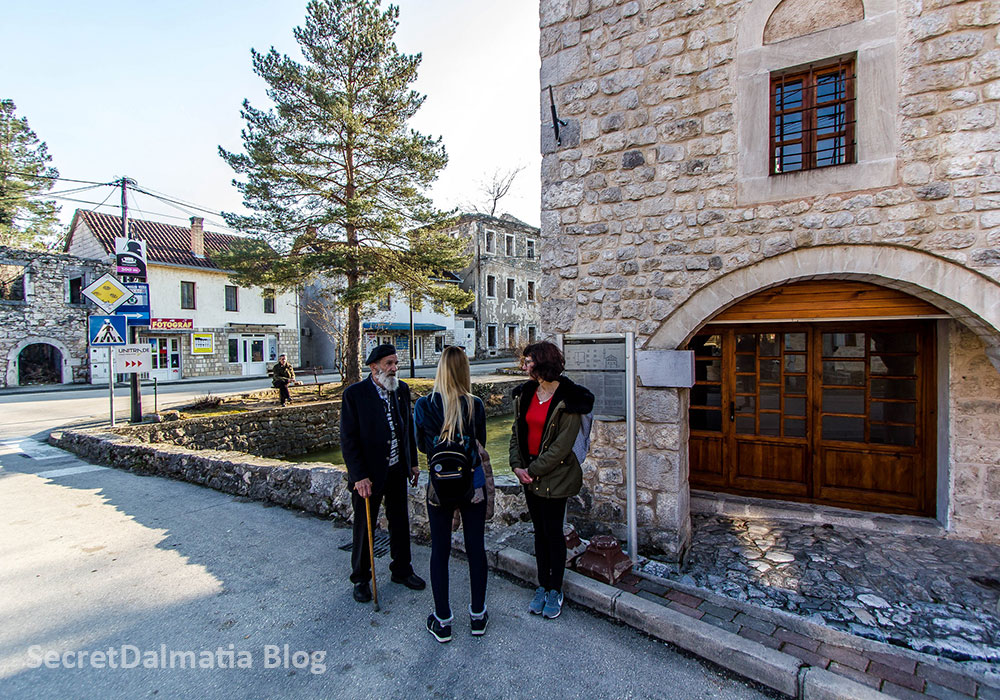 Stolac is a lovely place. Layers upon layers of fascinating history and stunning nature. It should definitely be included when visiting the region as it offers quite a bit for travelers looking for unique and off the beaten path experiences. No matter if it is just a stop en route to inner Bosnia or even en route to Dubrovnik, this is a great stop. 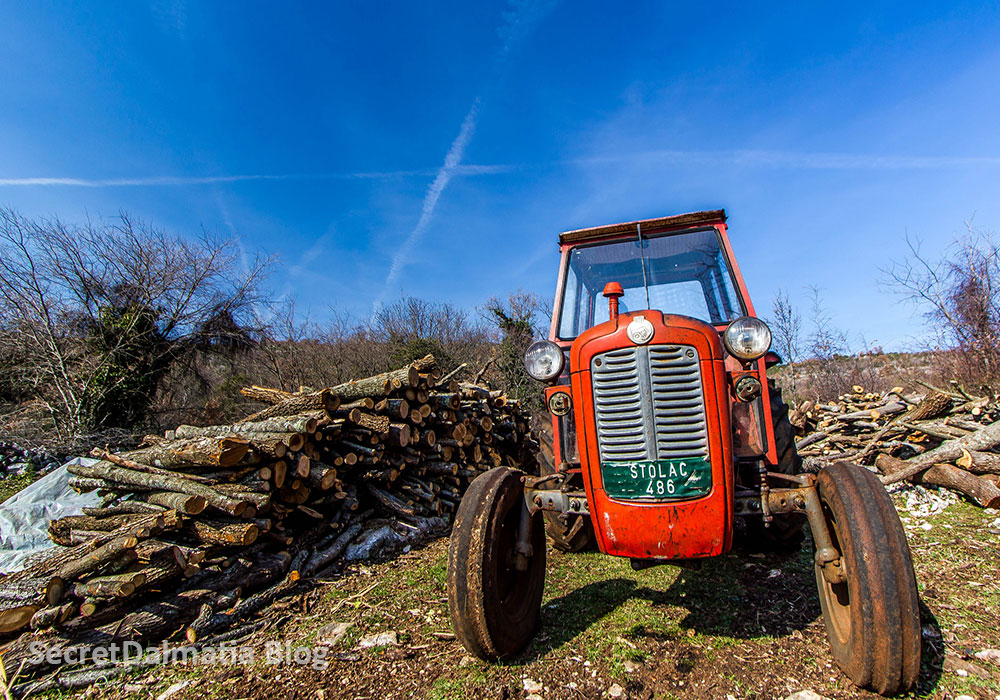 And we will return. Many more historic places to see and explore deep in beautiful Hercegovina!