Even though Croatia is quite mountainous, we don’t have any peaks over 2000 meters. Our highest peak is Sinjal (1831 meters/6004 ft) in the Dinara mountain range and I had a desire to climb it for quite a while. Actually, everyone in the country should attempt it at least  once!

Dinara is one of the most beautiful mountains in the country and this particular view is one of my favorite ones of the entire Dalmatian hinterland!

This hike was planned for a long time. First we wanted to do it this past May but had no time. With forecast looking favorable for the beginning of October, we made quick plans for this Saturday, filled up the tanks and made small shopping for food. The climb is demanding and there would be no time for proper meal.

Before departing, I did a lot of research but the information available online is not really sufficient. Especially not for those willing to drive. That is why I will put quite a few photos and give as many details as I can.

First, Kinin is the starting point.

We decided to meet near Krčić waterfall. That is one of the most impressive waterfalls in Croatia. Usually.

This time of year, there was no water coming from Krčić stream just above the waterfall. This was our meeting point. Right by the very start of Krka river.

One can reach Krčić just by turning first left (or at the bridge) when driving from Knin to Sinj. Since were going the oposite direction, we returned and followed signs to Strmica and Bosnian border. Only few kilometers on that road, there is a sign to a village Guge. Take right before restaurant Ivan and follow the sign to Dinara (sharp left).

The road to Dinara is a dirt road from the start. While it can be done by a regular car, this is not recommended at all. You need a proper off road vehicle to do this trip. Or one can walk.

The road is wide and in fairly good shape. Almost no traffic and no life but we did see a couple of shepherd dogs.In any case, follow the signs to Planinarski dom. Not too many of them but enough. I also used Google maps to stay on the right road. After a fairly boring, short ride, the views of the mountains became stunning. We came out of woods to Markov grob view point. This is also a good spot to leave a car and walk all the way to Sinjal. 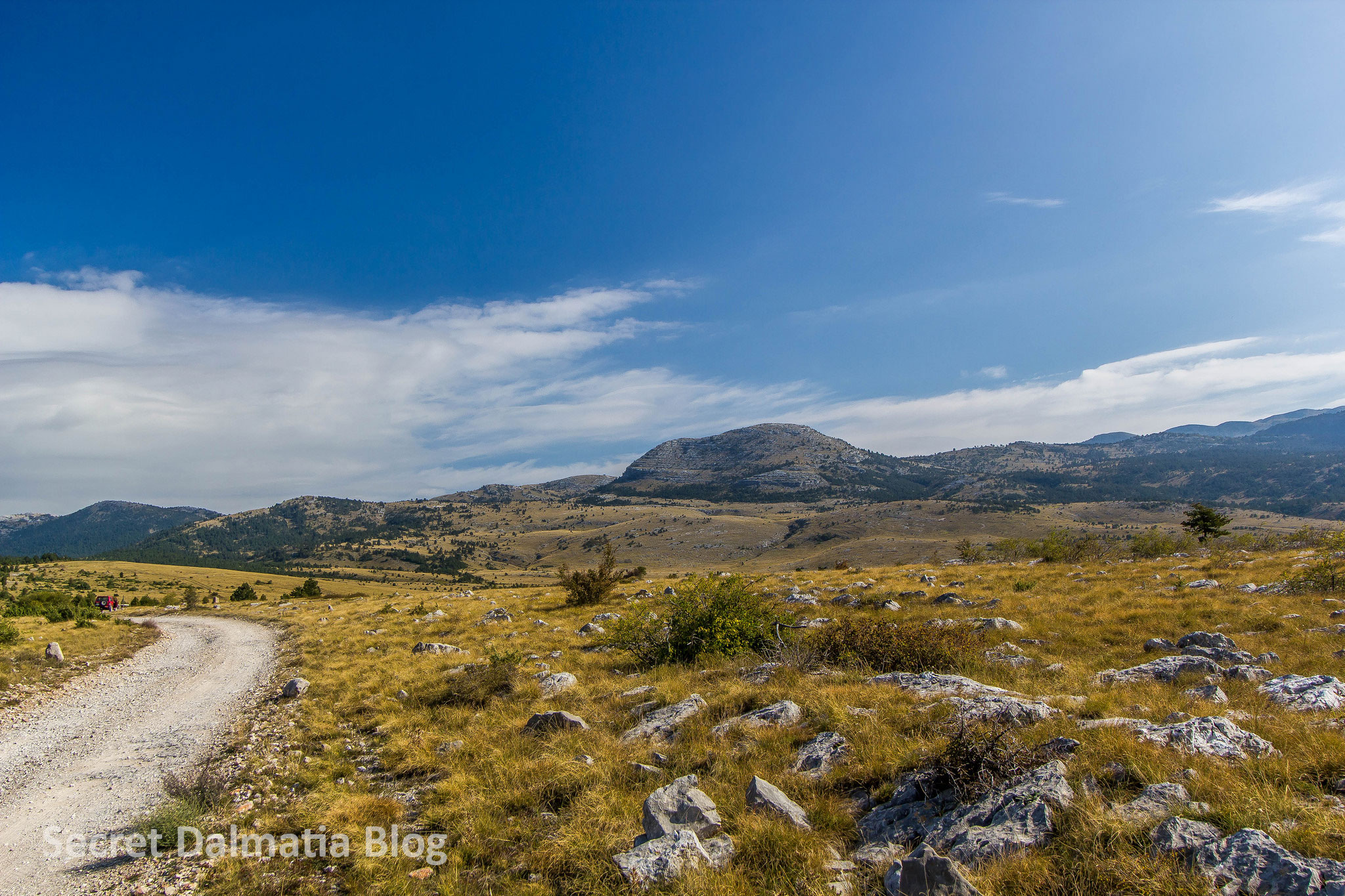 We saw some other people making a stop and taking photos and we also met a guy who is counting wolves! Of course, he does not see them but looks for wolf dung and other signs.

We did see, just before reaching Markov grob a jackal crossing the road! So I was glad I could report it to someone who can actually mark it down where it matters. It was actually an interesting combination of a dark jackal and a hawk crossing the road. I am sure that would mean something in more romantic times where “signs from the skies” were important but we just continued.

We got to talk to this guy (he is from Sinj) and learned that wolves in Croatia are truly endangered and that there are only about 200-300 animals left! There were also some newspaper articles on populating the region with large Siberian wolf but we learned that it is all nonsense.

The road continues right from this point and we drove to another sign and then up the hill. We also saw some hiking markers to help out. Soon, we reached a very scenic Badanj peak overlooking a lovely valley. The weather did not look good any more…

…and this was the last bad part of the road till Brezovac mountaineers’ lodge located at the edge of a very picturesque and spacious valley. 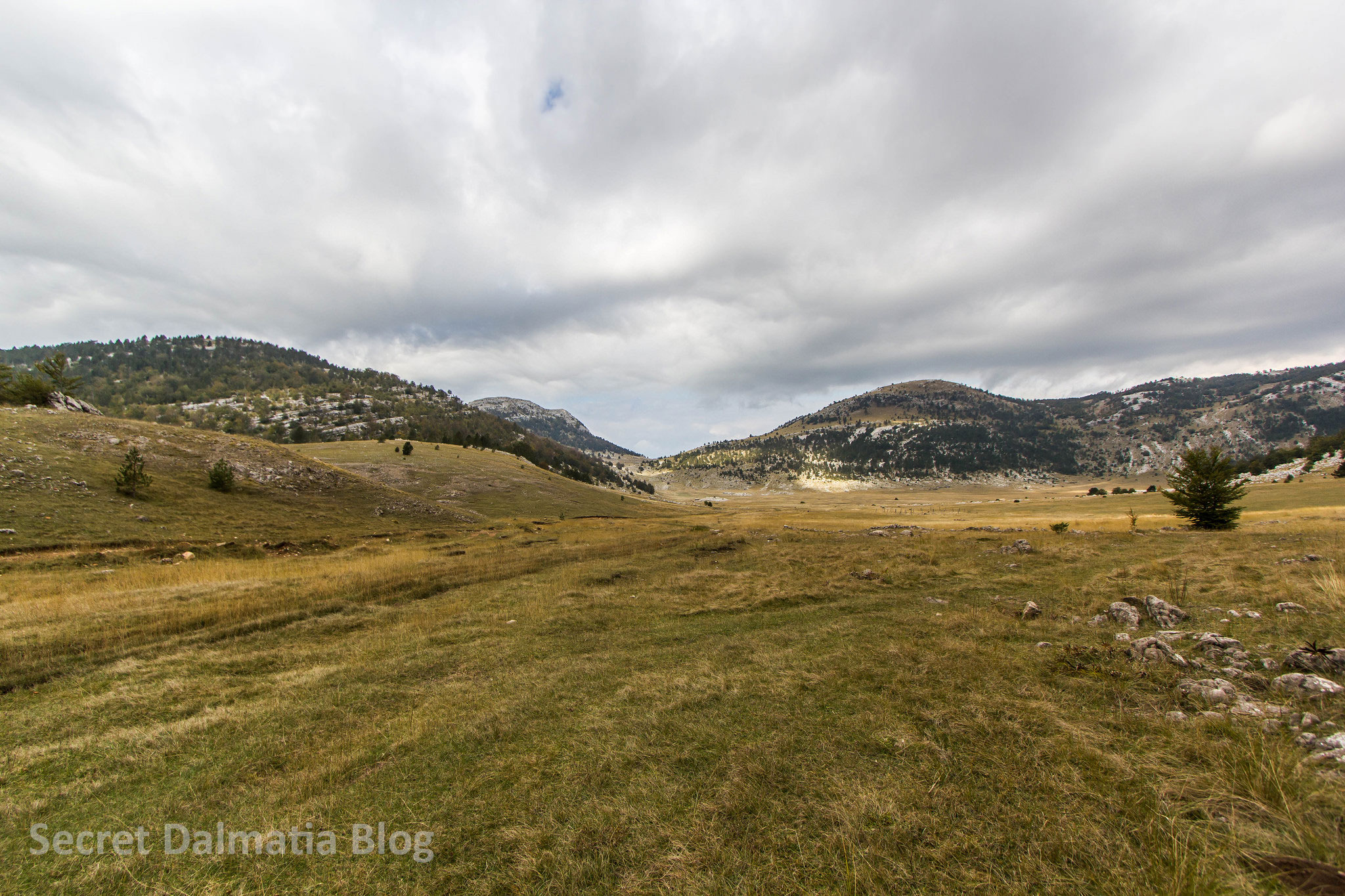 This was an ancient home of numerous families of shepherds. There is a great video of last ones of them: https://youtu.be/7ymcKpsk3cw  The times have changed.

Brezovac lodge is a solid place with great grill area ( of course). This is, for many, the place to park the car and continue on foot to Sinjal as the path through the forest is quite scenic.

Since we had kids and most of us are in no shape to walk for three hours from the lodge to the summit, we followed another group driving to a closer place. The trail is nicely marked through the woods and there is no way one can get lost. 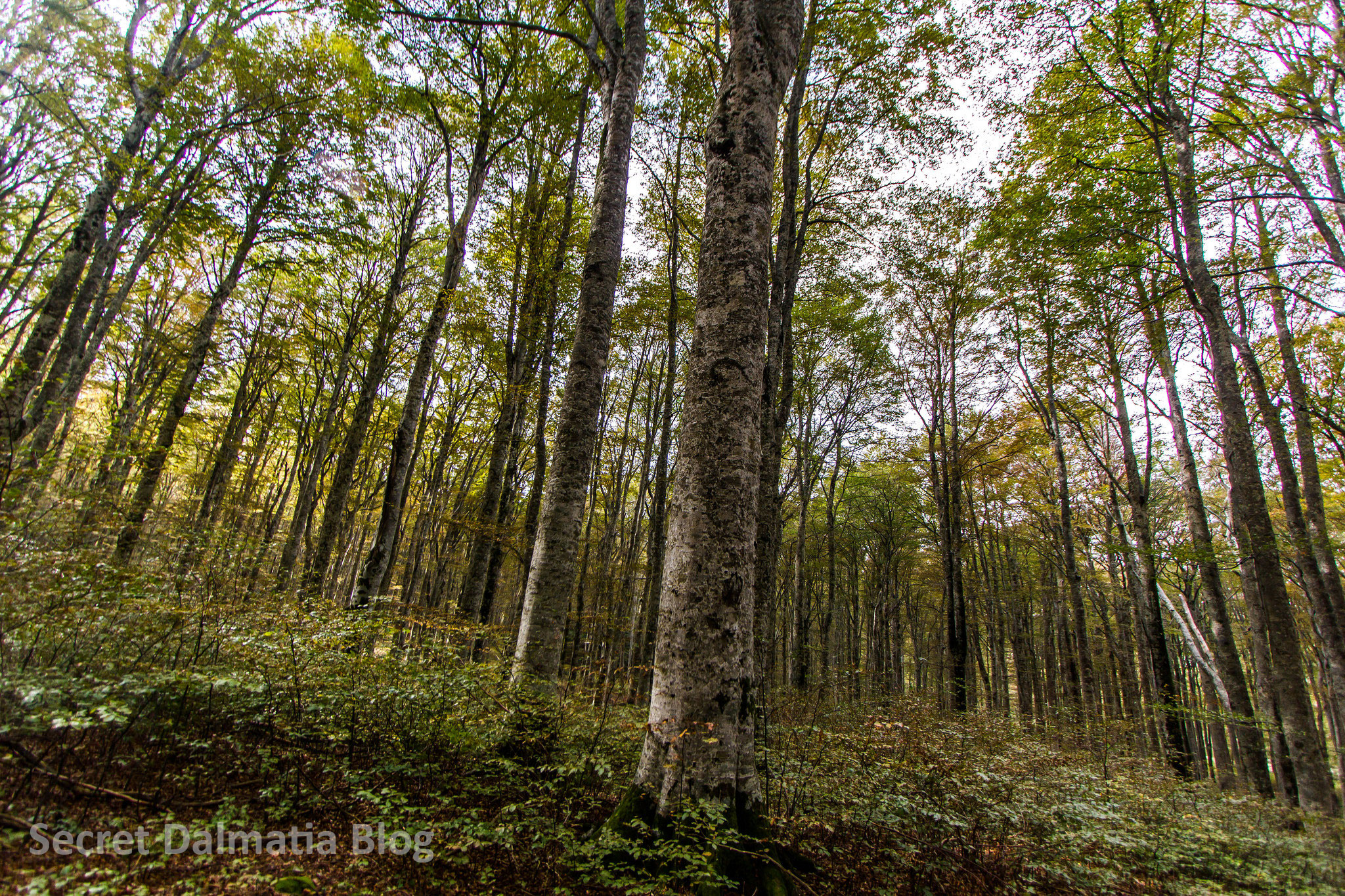 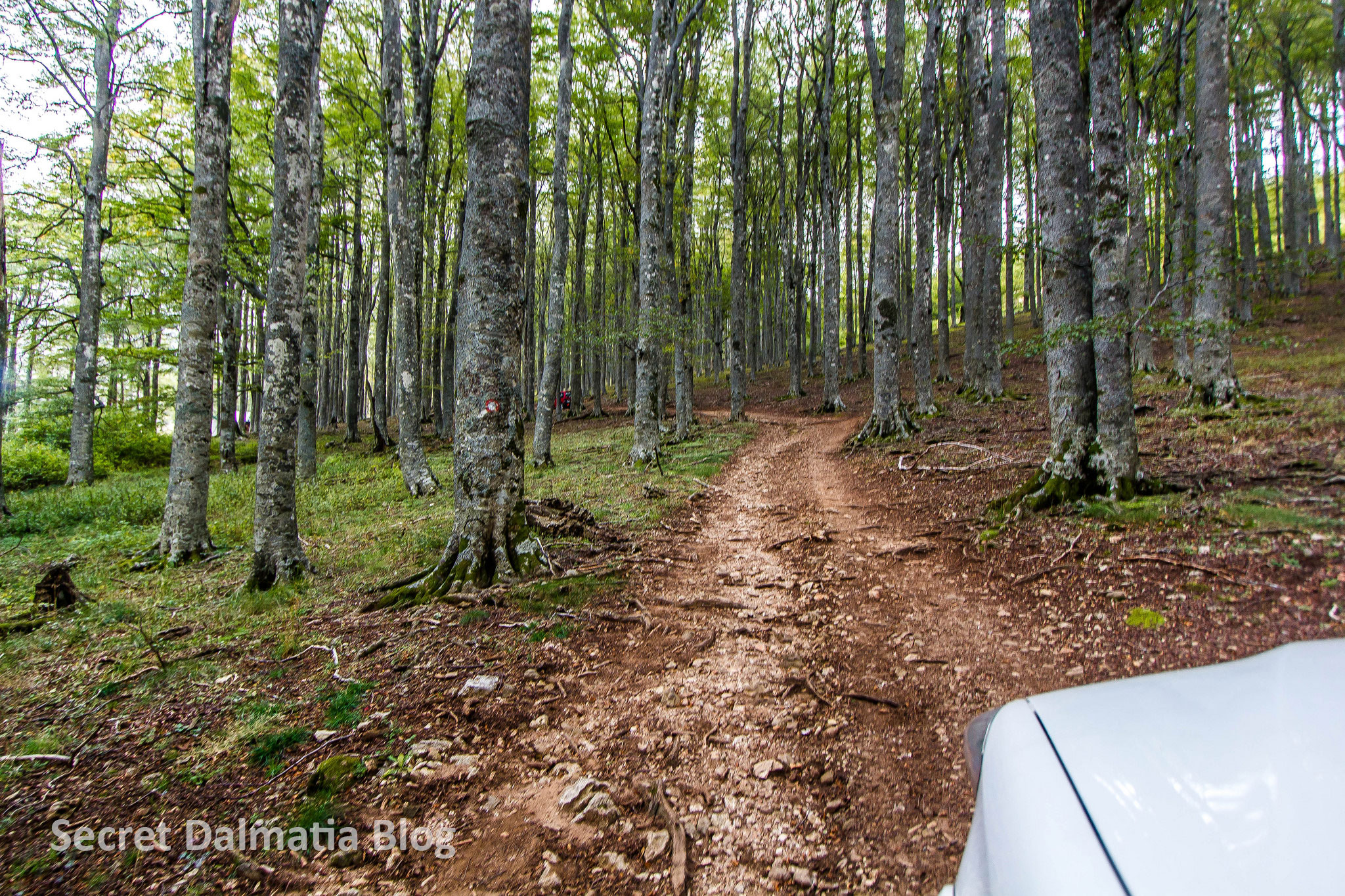 This road is for serious off road vehicles only! And then we parked in a lovely valley. 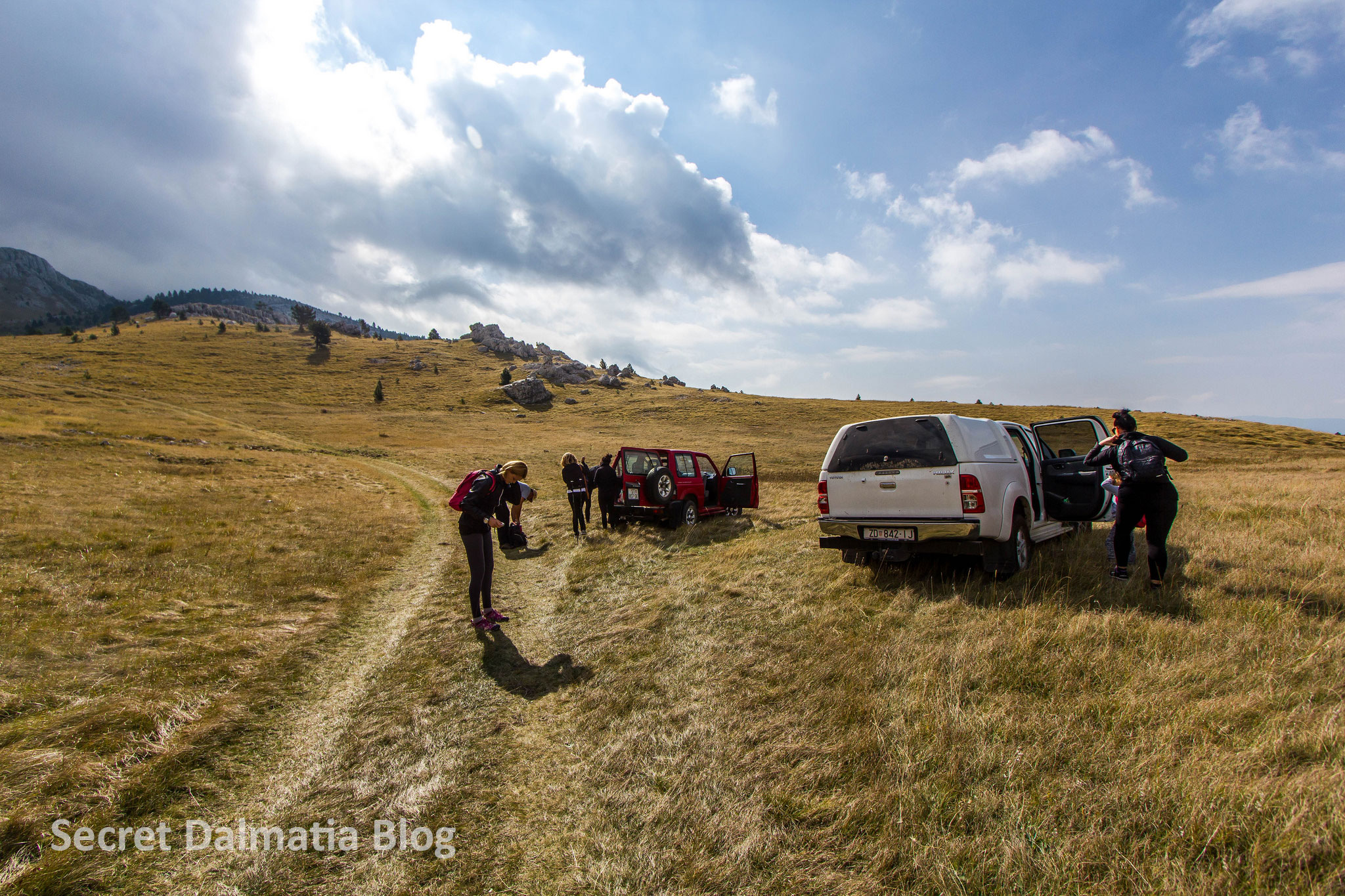 The weather was great and sunny but there were clouds at the very peak and we could not really tell where the peak was. Again, the trail is very well marked and it is nearly impossible to get lost. 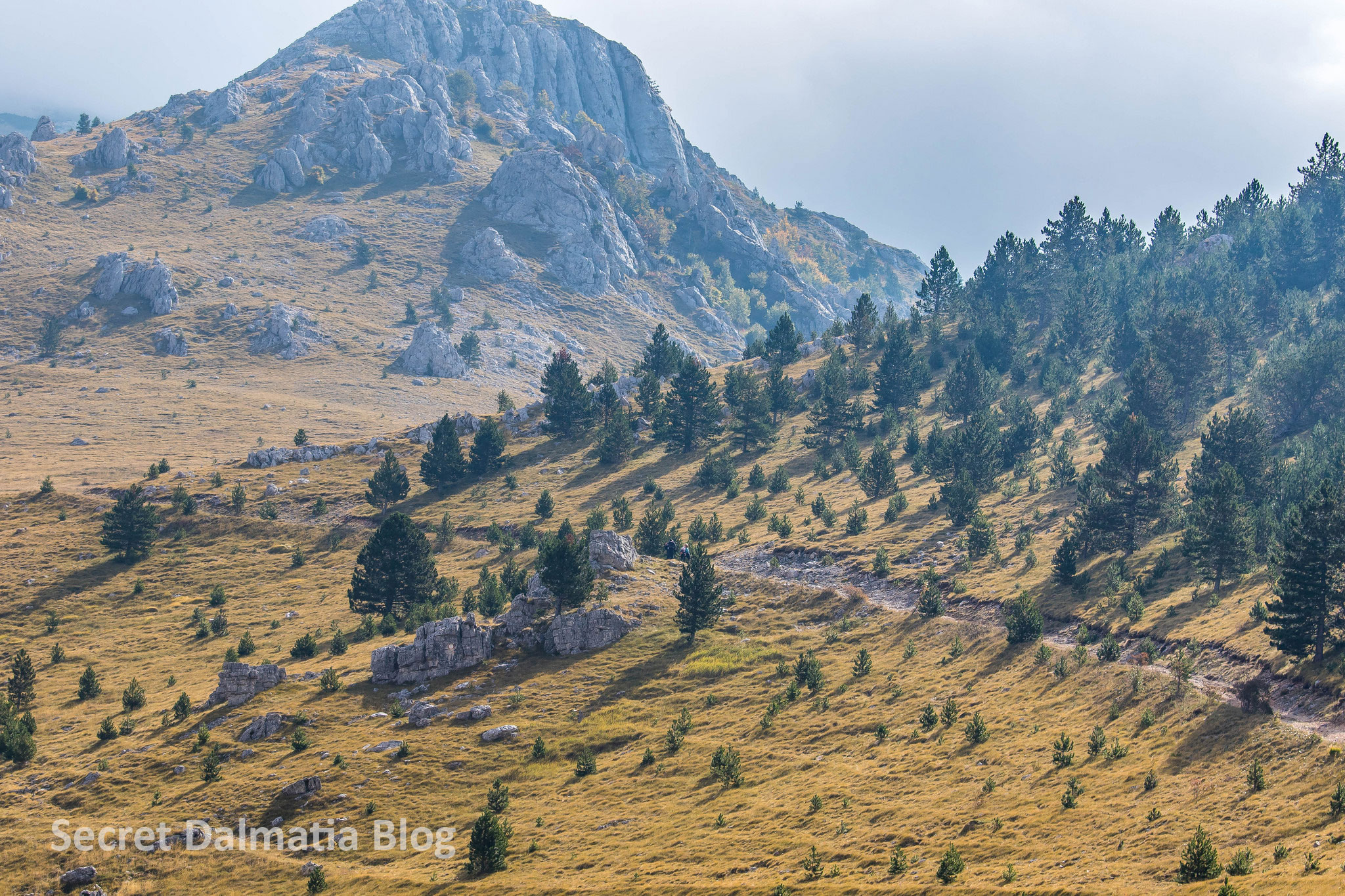 One part of the group left us while waiting for our friends who decided to park at the lodge. We started the hike with kids as the trail is easy at the beginning. 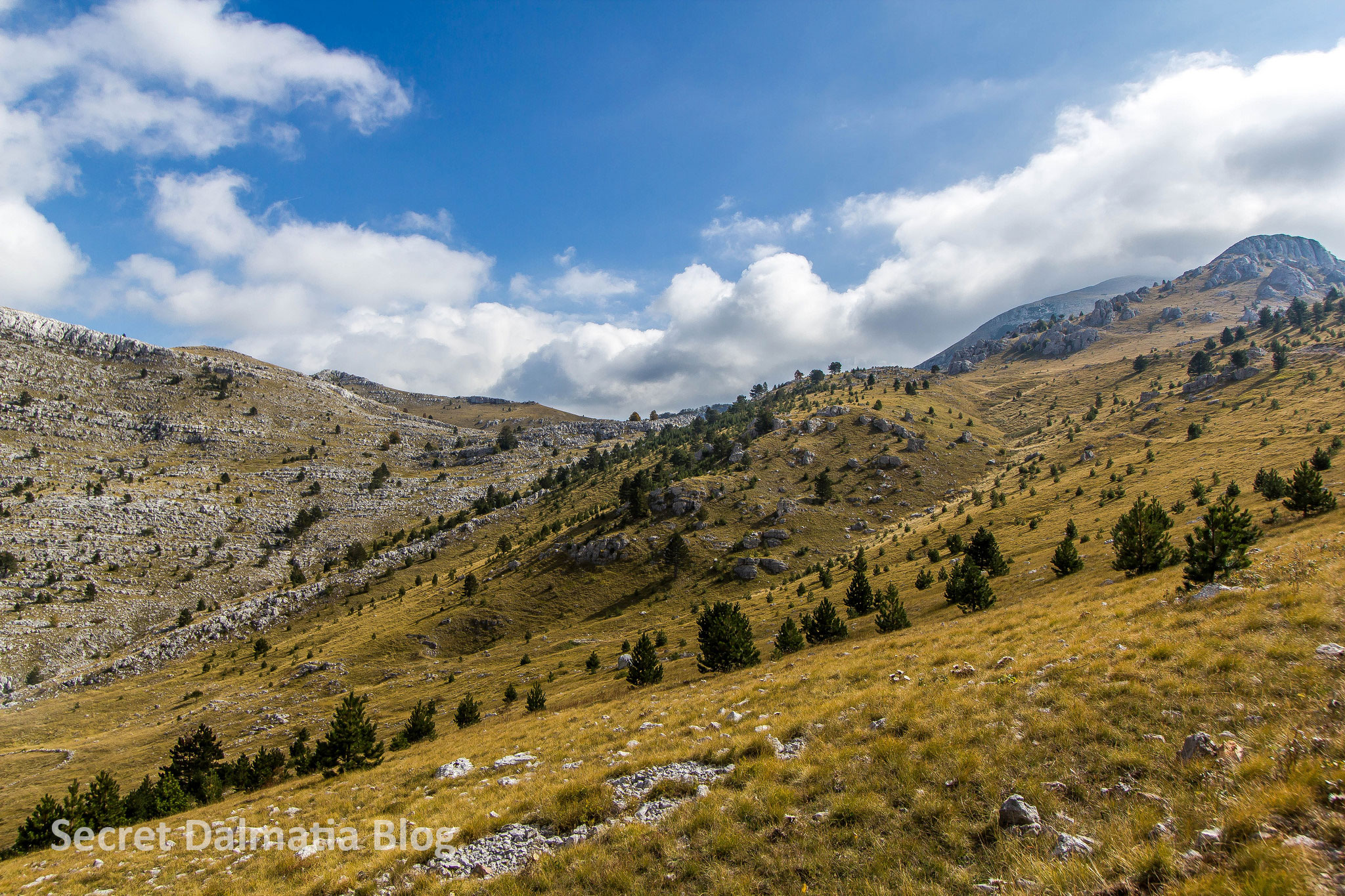 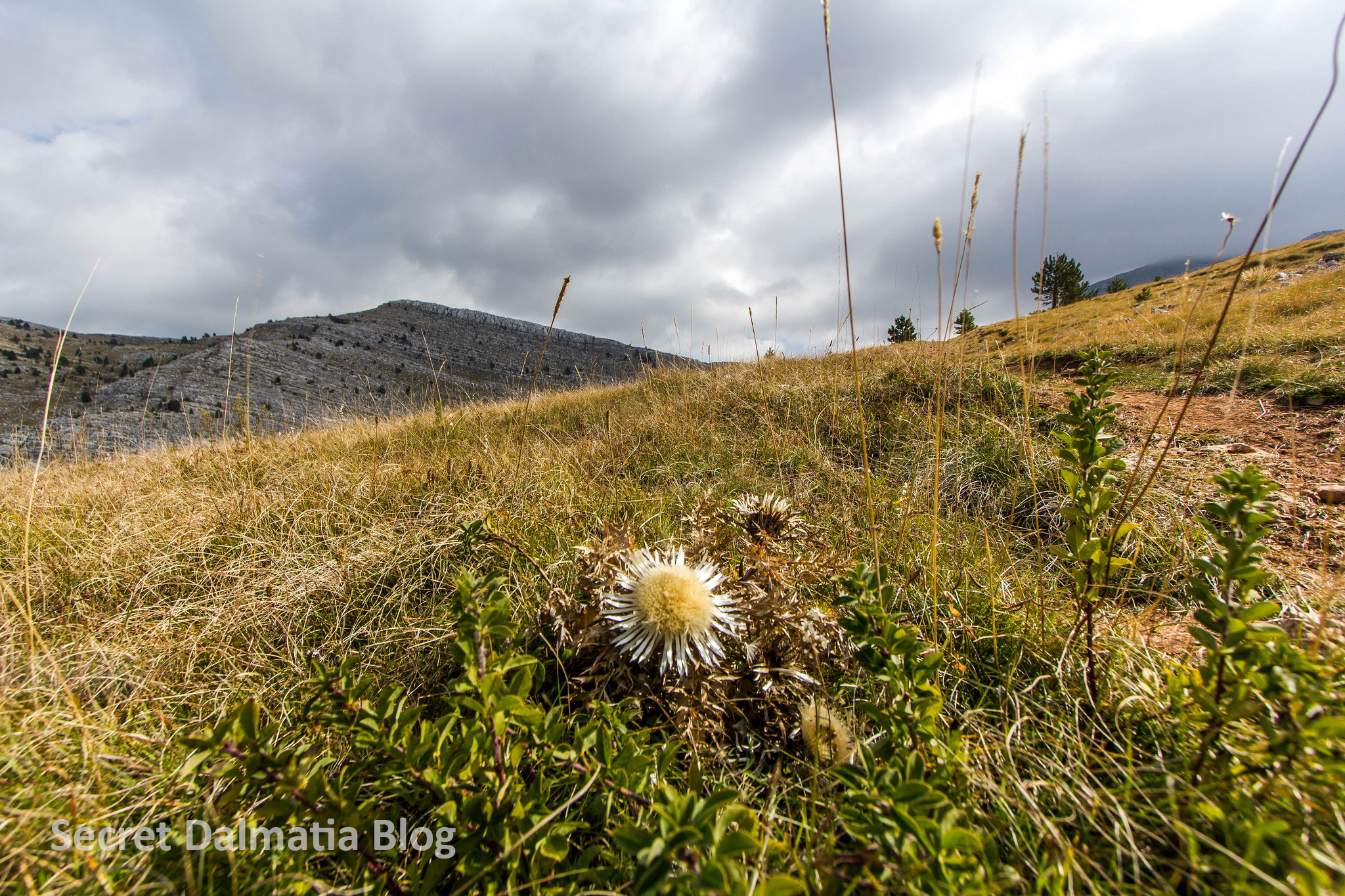 In the fresh, mountain air we got hungry fairly soon and it was already 11 AM. The right time for marenda (or brunch).

And it was time to continue as we were still quite far from the peak. Some of us did not feel like going much further so part of the group stayed in the meadow below waiting for us who decided to reach the peak.

We continued following the trail that now got steeper. 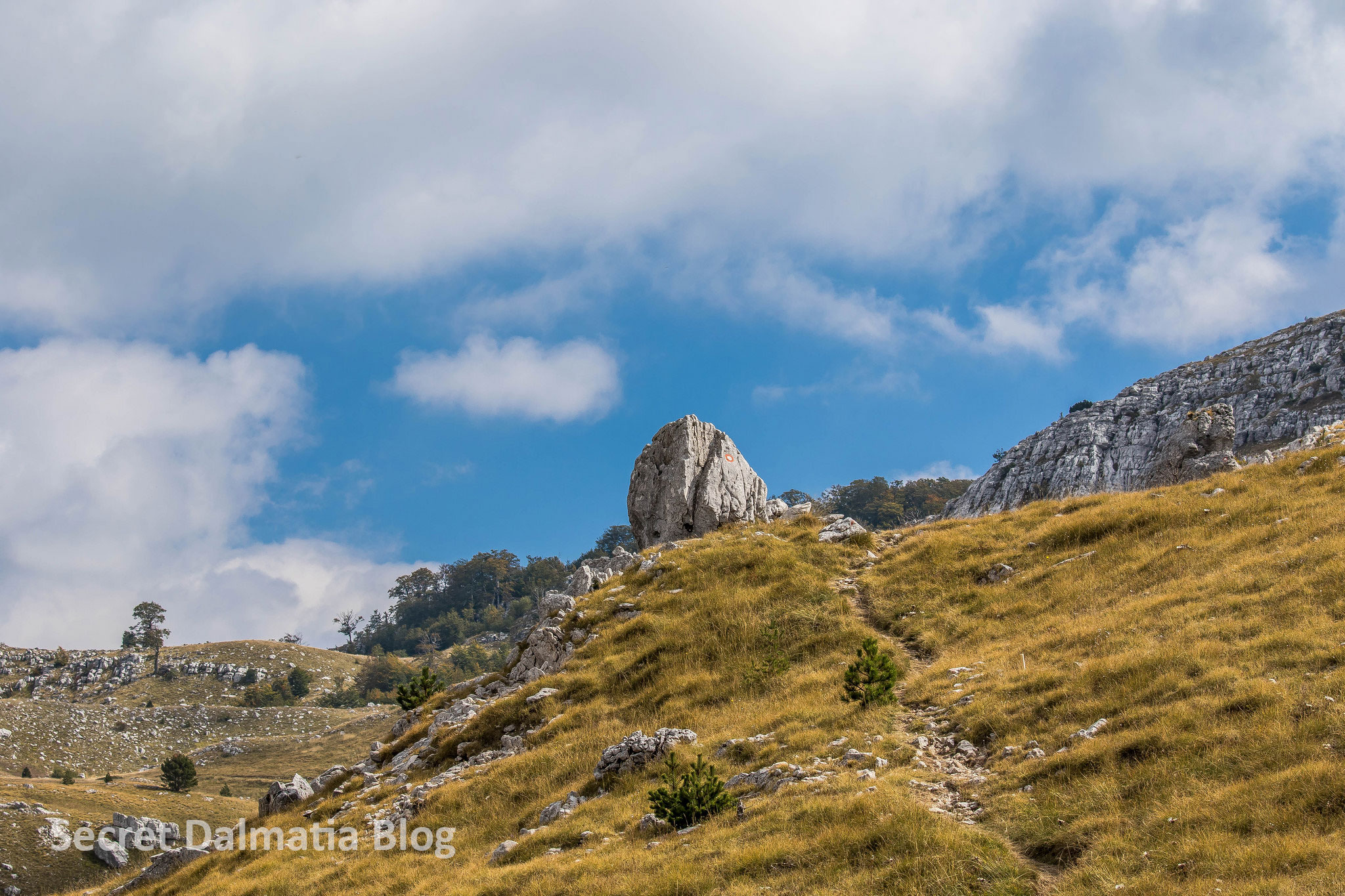 ..and got us into the woods. 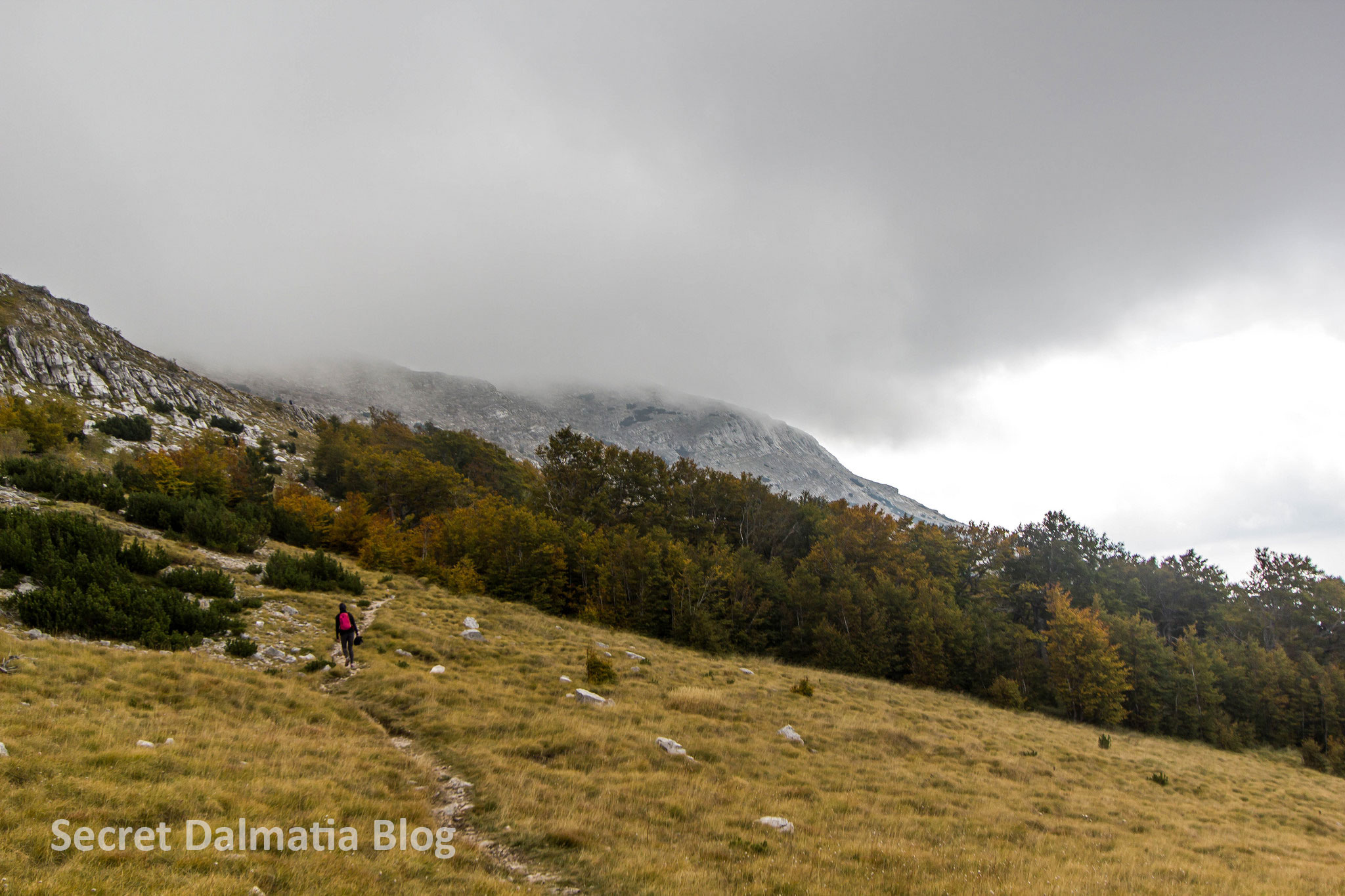 This was an easy part…

After the woods, the trails gets much steeper and more difficult. I had to stop several times and thought about giving up on half a dozen occasions.

But, when one travels in a group, it is easier to continue. Stopping to catch a breath and to enjoy the views also helped. 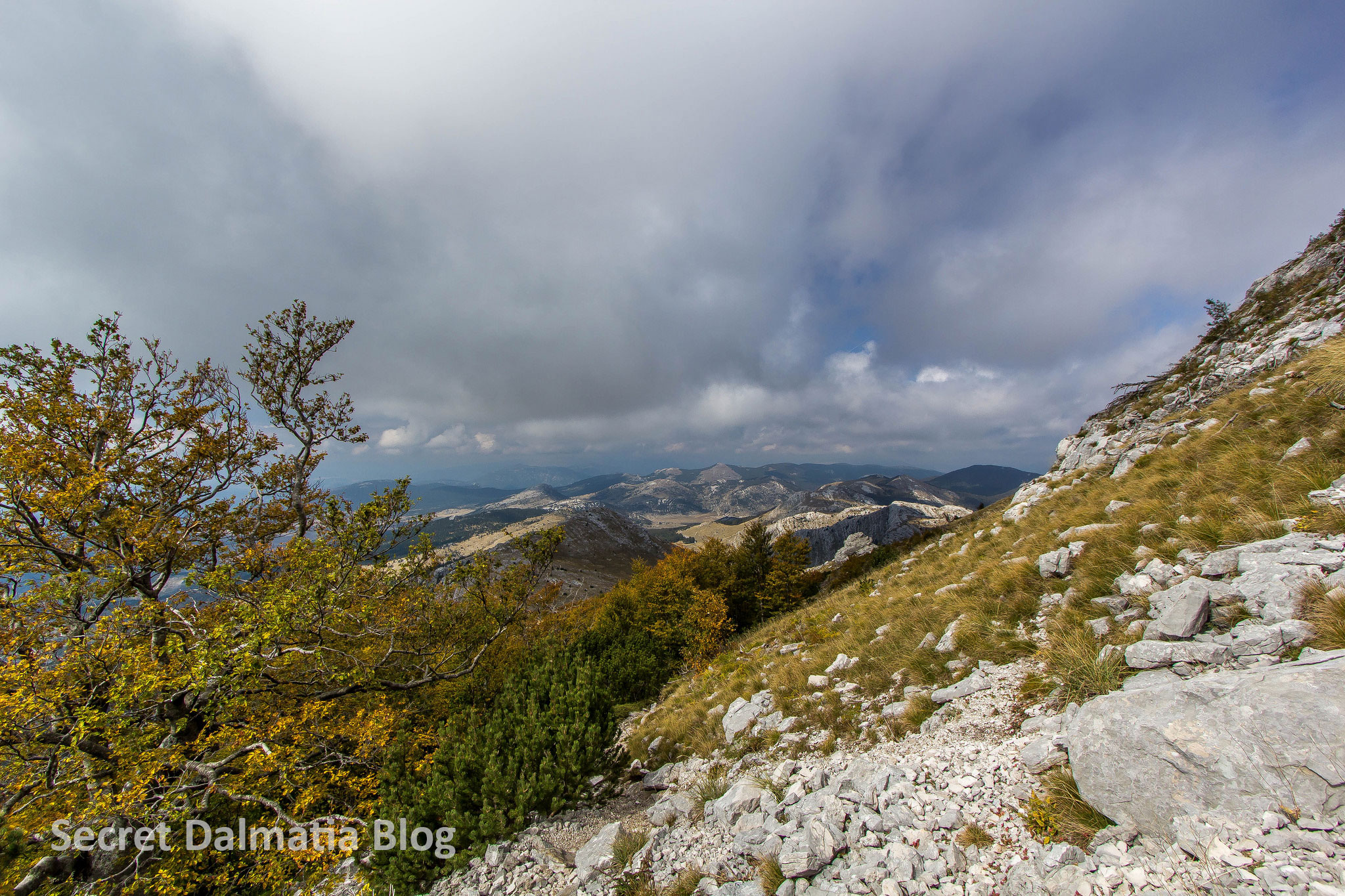 Soon, we were in the most difficult part of the climb. That is the part that is very rocky and one needs to be careful. That is right below the final part that leads straight to the summit.

The monument at the peak has probably been destroyed by lightning and I was so looking forward to see that sign saying that this is the highest peak of Croatia. But there is only an official sign. 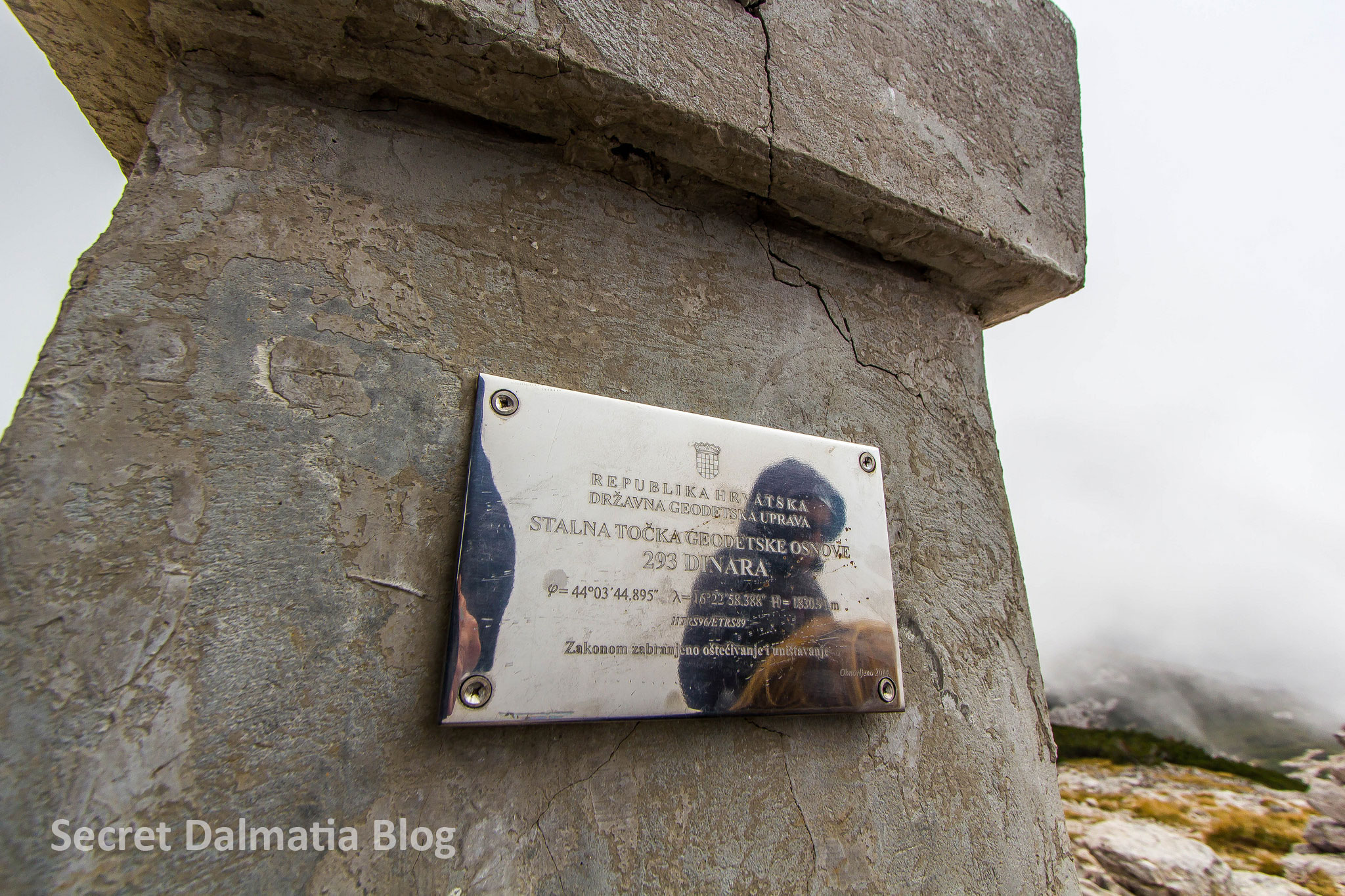 …and we did get the stamp from the box! 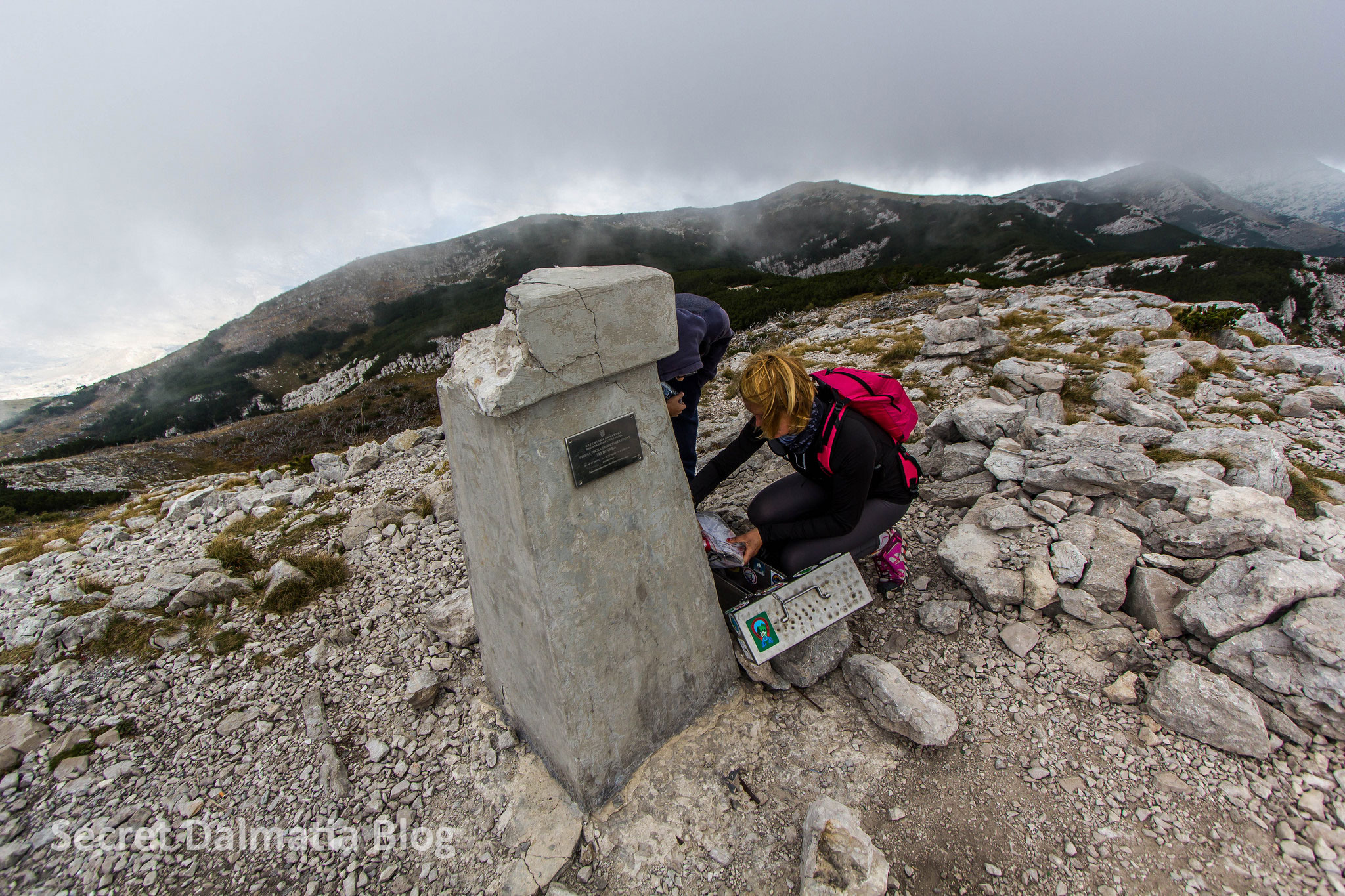 Quite proud of my son as there are not too many 12 year olds that have been here!

The peak was a busy place as there was another small group of hikers just below the peak and we got offered the gemišt :))) 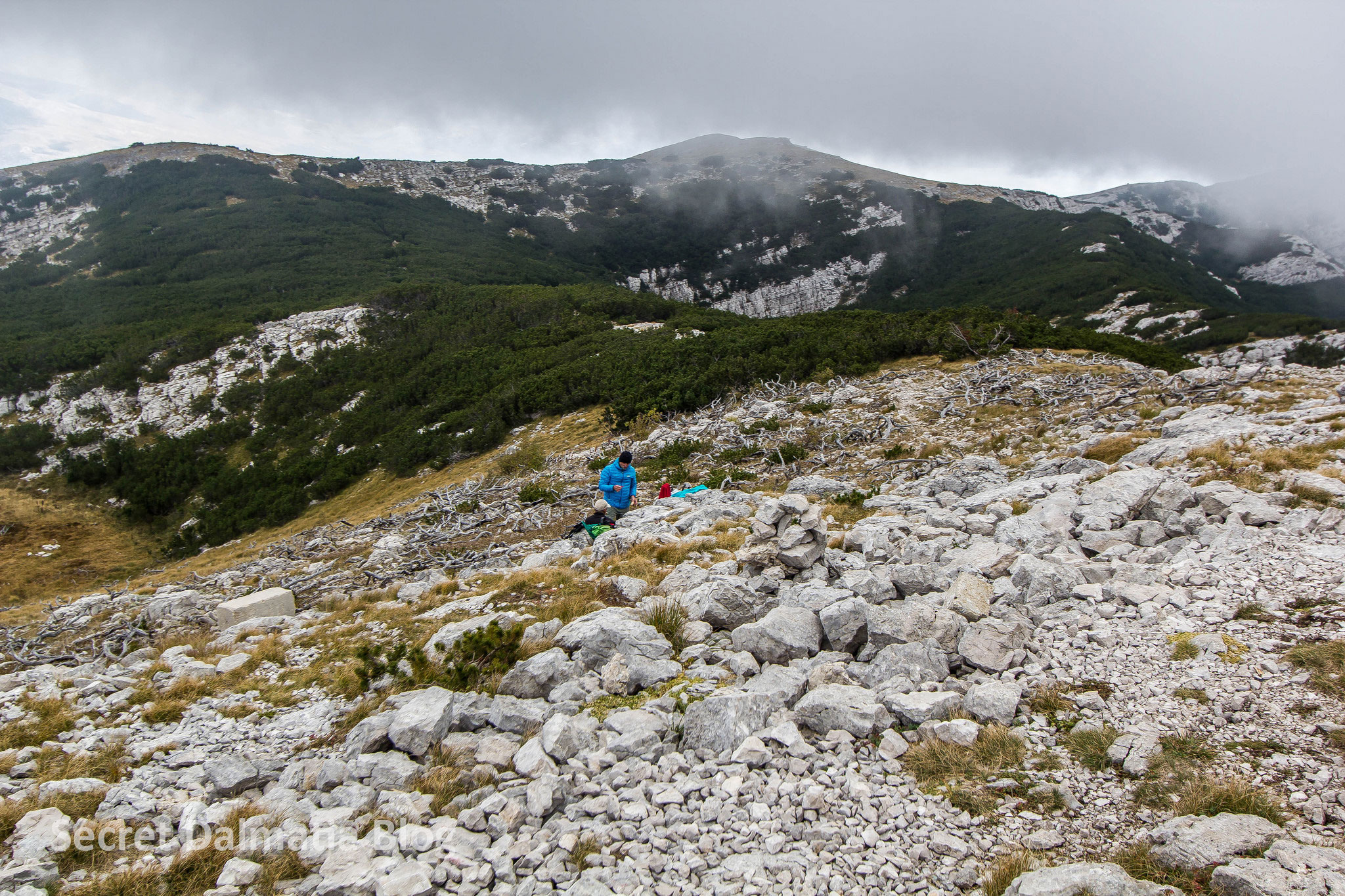 Too bad for the views but this was all we saw from the very peak. 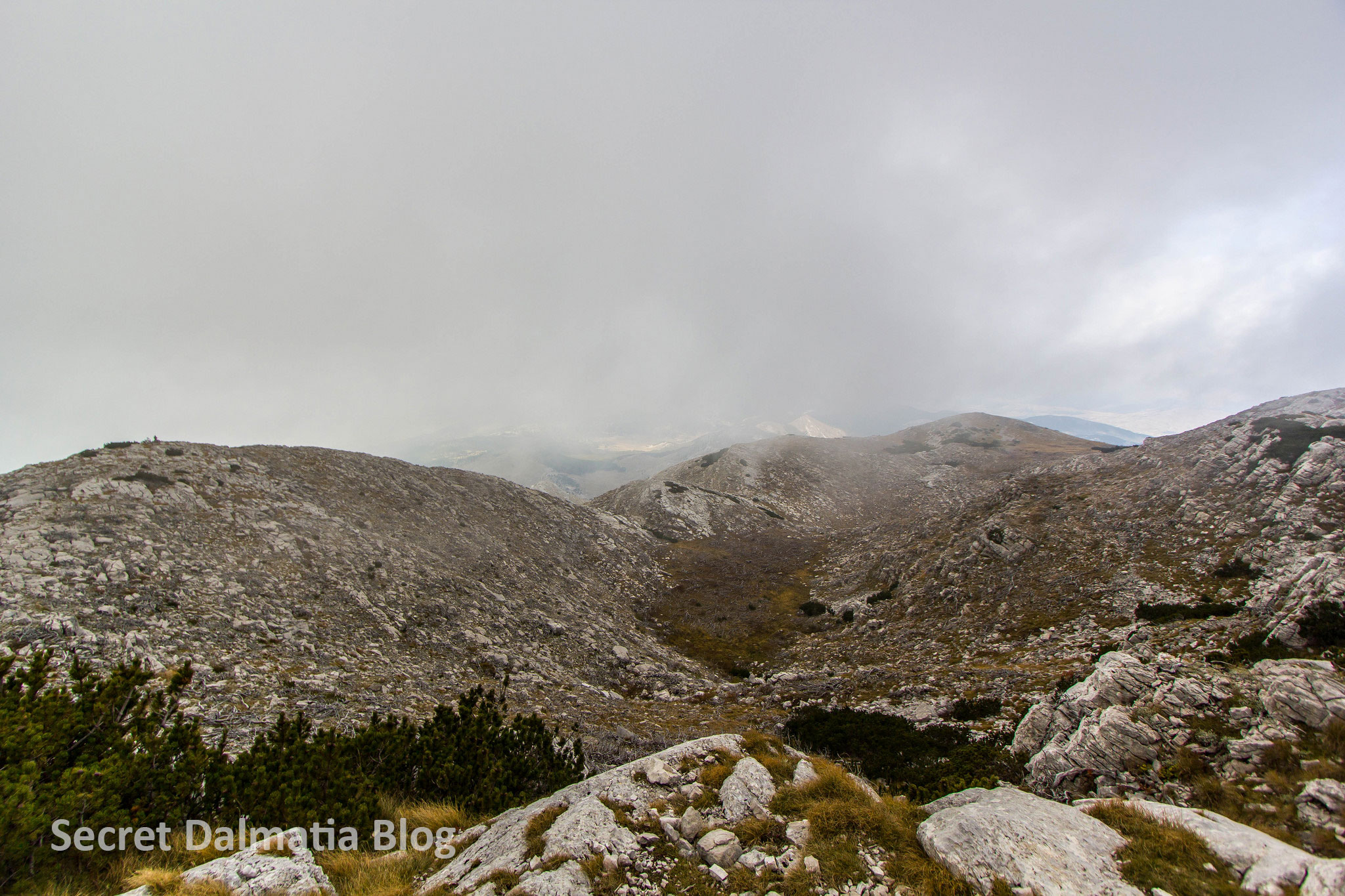 And then it was time to go back. It took us over  2 hours to  get to the peak from the parking but going back was much faster and with fewer resting stops.

Descent is not as demanding but still not a joke. And I wanted to enjoy the nature and take some shots of the region. 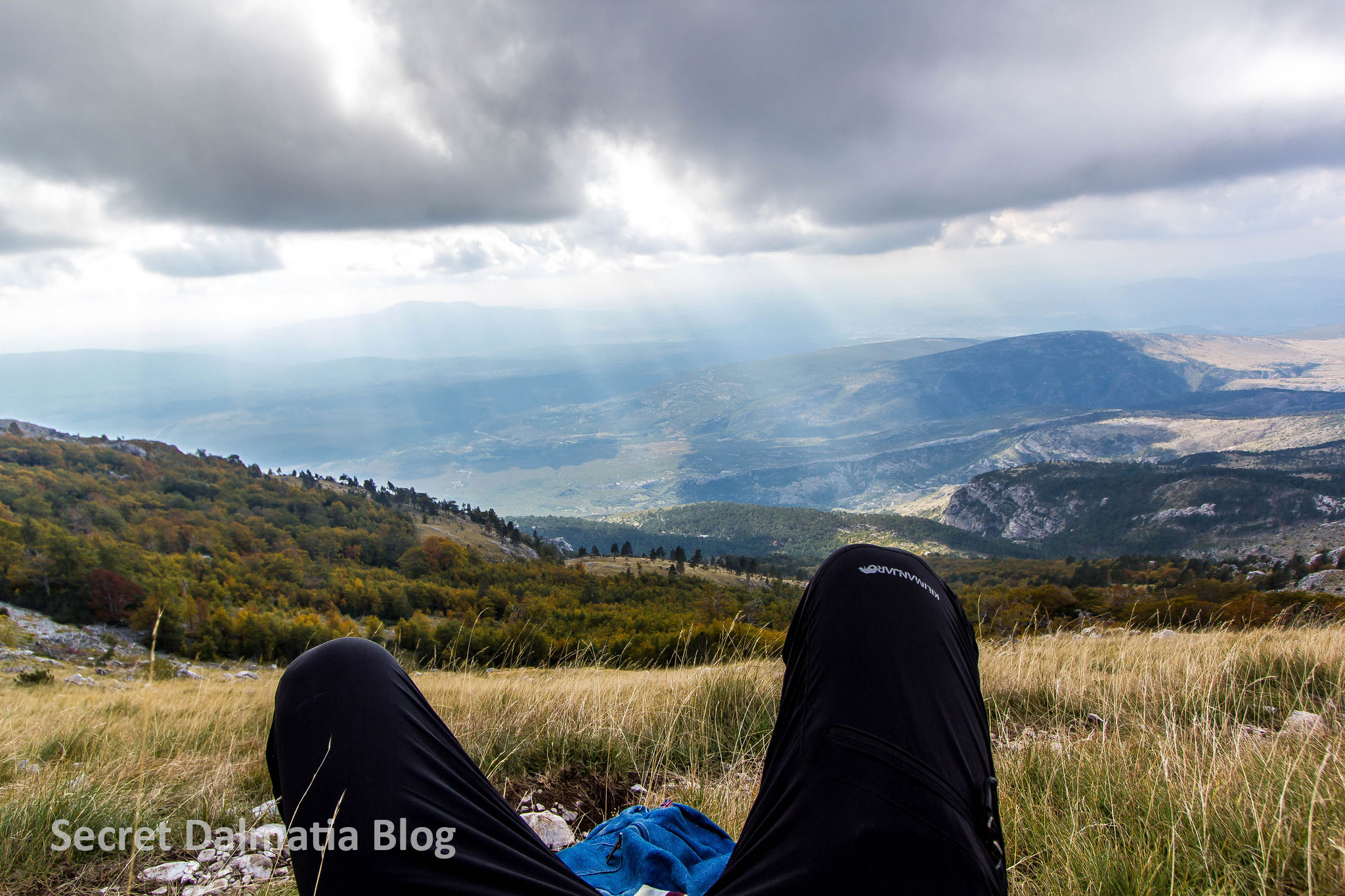 I could not think of an easier way to get here but some guys thought of a HARDER way to get to Sinjal! 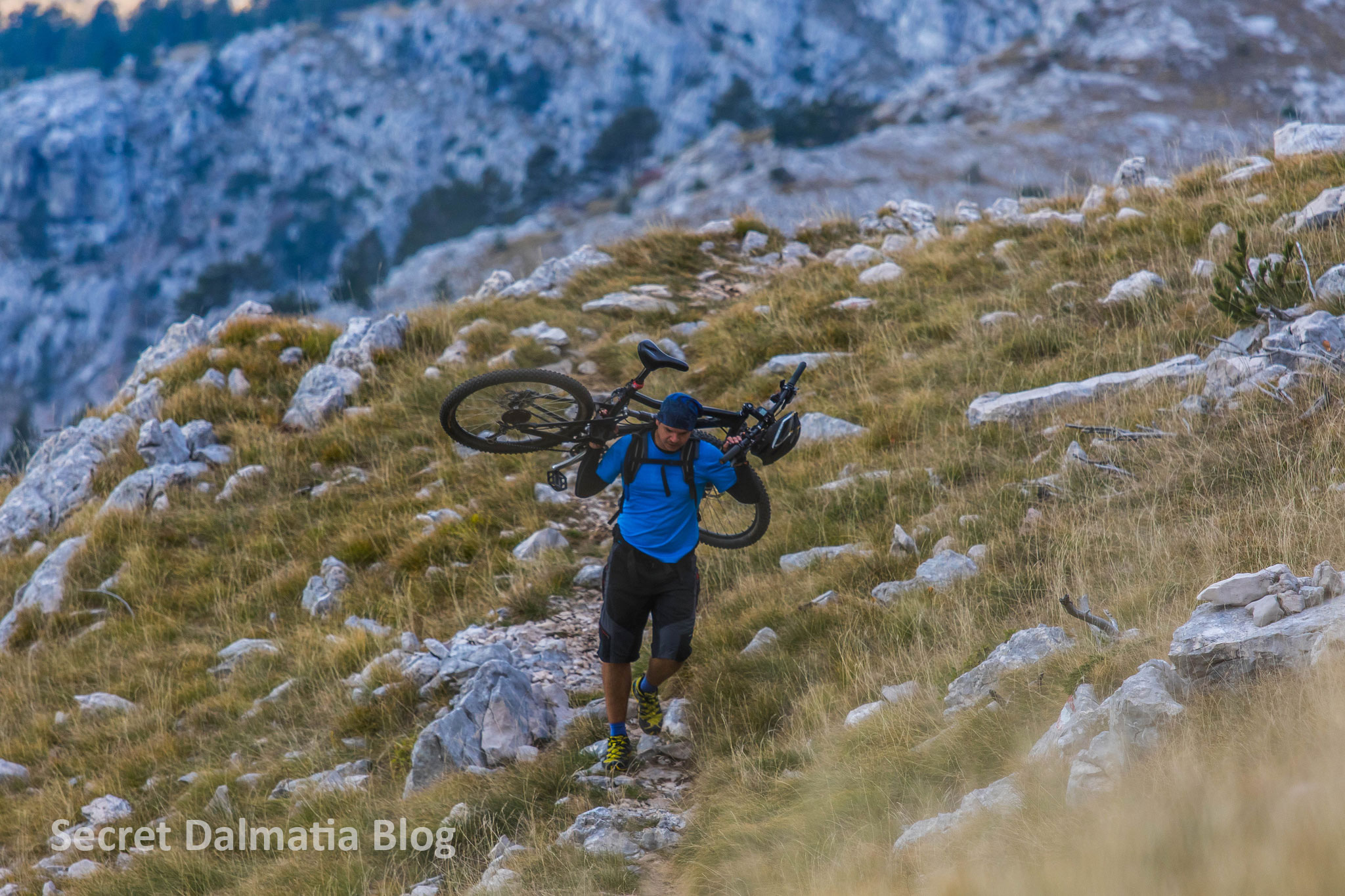 Their objective is to climb to the peak (with their bikes on their backs) and then drive down to Glavaš. Glavaš is another point where people start their hikes to Sinjal.

We got to the valley soon and decided to drive back as the days are already shorter and wanted to enjoy more time at the foothill of Badanj. 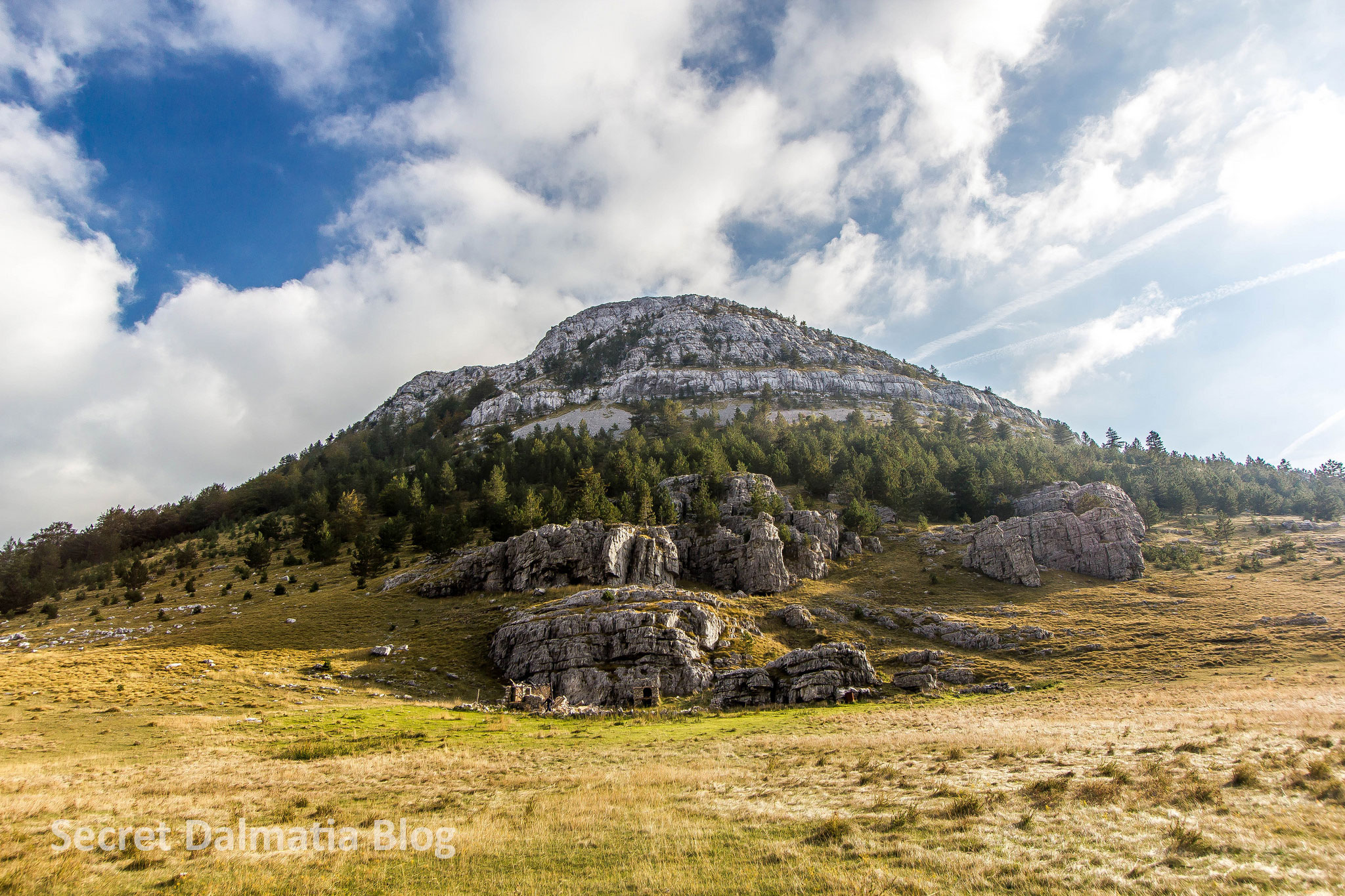 Badanj has some fascinating stone “towers” and shapes. 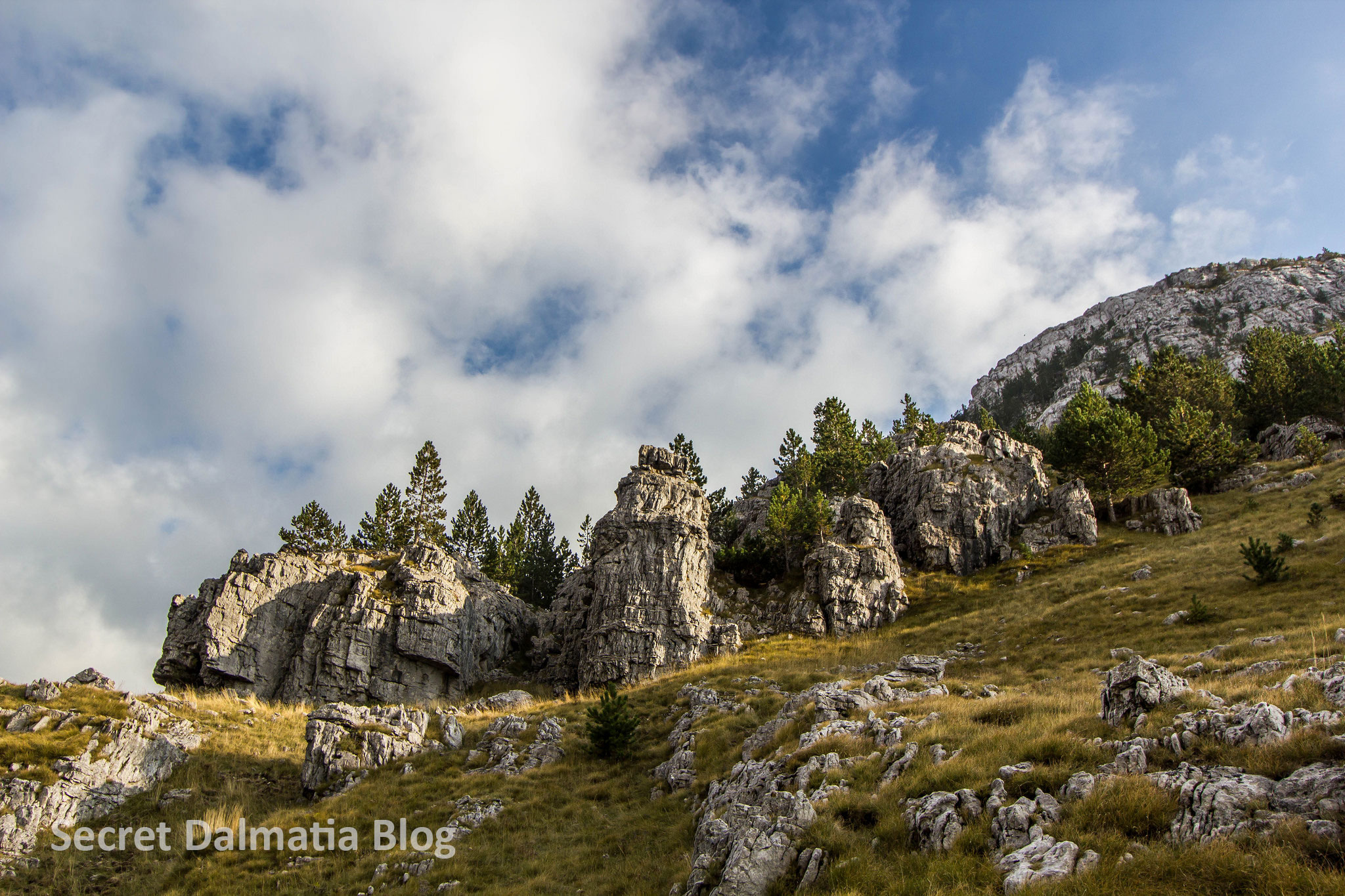 While there were not too many animals, I did see one spectacular caterpillar!

Leaving Dinara behind us, we stopped at trout farm to get some fish farmed at the very start of Krka river. It does not get any better than this! 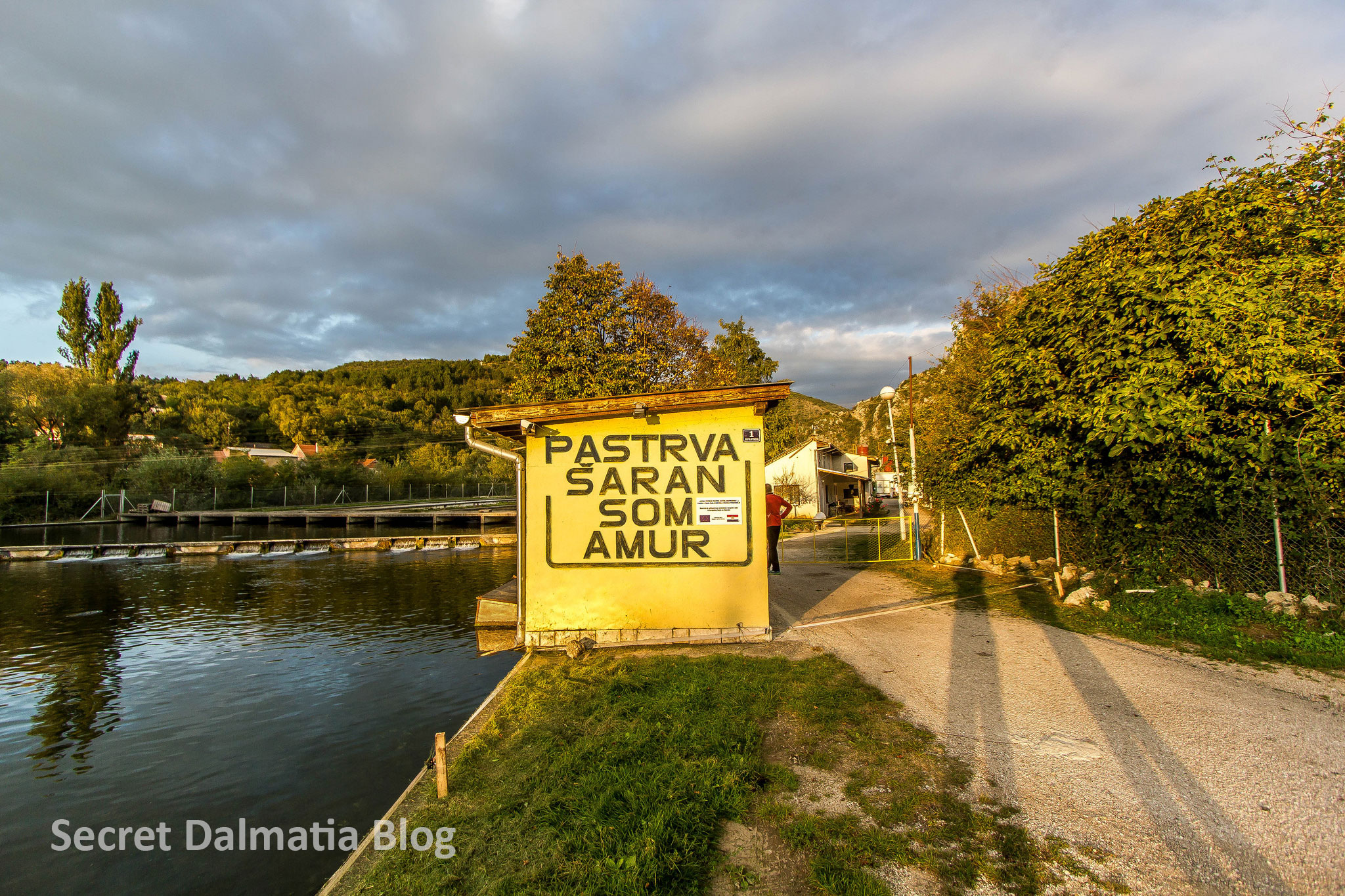 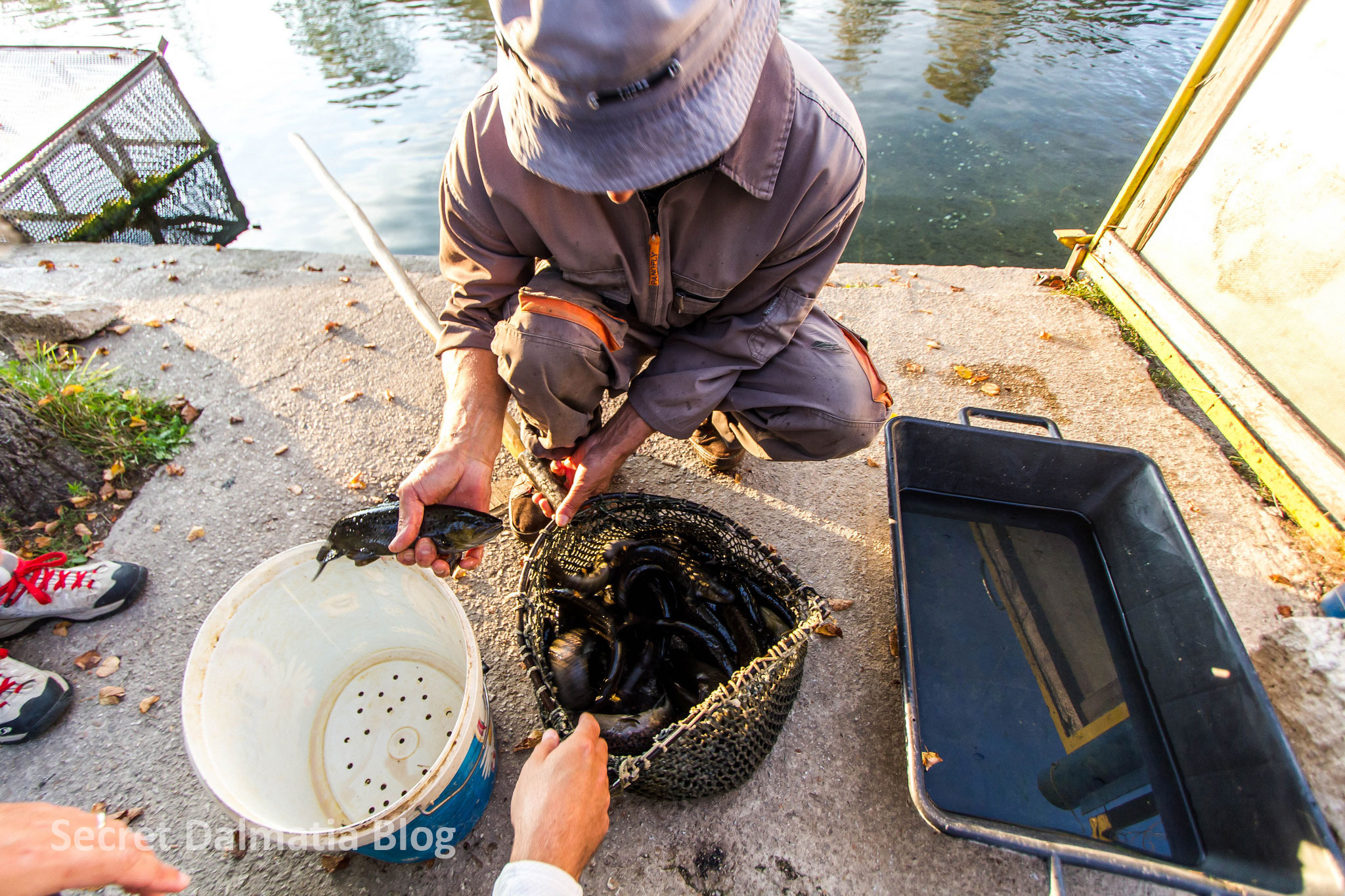 Going back, through the night and quiet villages of Bukovica, we felt (again) blessed by the fact that we live in such a special and uniquely beautiful little country. I do take my kids everywhere with me so they learn to appreciate all the riches we have and to stay connected to nature. Together with about a dozen others who climbed that peak on the same day with us, we are a minority. It is easier to sit on a sunny riva and have an opinion on the economy, tourism, politics, sports…